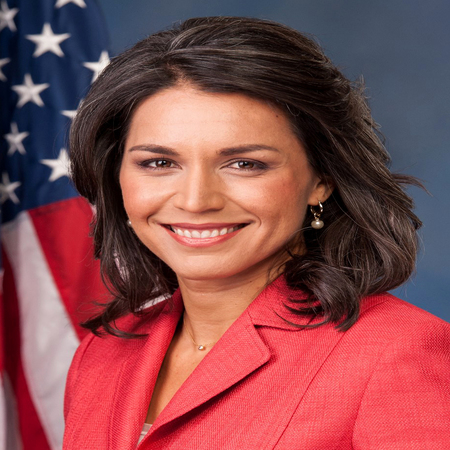 Tulsi Gabbard is an American politician and Hawaii Army National Guard, officer. Moreover, she is severing as the U.S. Representative for Hawaii 2nd congressional district. Apart, she is the first Hindu member of Congress and also the Samoan-American voting member of Congress. she was also a candidate for the Democratic nomination in 2020 Unites States presidential election. Back in 2004, she voted and lobbied against same-sex marriage but, later in 2012, she publicly apologized for that. She is married twice a time in her life.

Tulsi Gabbard was born on April 12, 1981, in Leloaloa, Maoputasi County, on Samoa's main island of Tutuila. She is the daughter of Mike Gabbard, who is Samoan American politician, and Carol Porter Gabbard. She grew up with her four siblings and raised in a multicultural household. She holds an American nationality and belongs to Samoan ethnicity. She follows Hinduism. She completed her graduation from Hawaii Pacific University with a Bachelor of Science in Business Administration with a concentration in International Business.

Married Twice in her life

Well, Tulsi, 39 is a married woman. However, she is married twice in her life. She was married for the first time with Eduardo Tamayo in 2002. But, their relationship didn't last for the long and they divorced in 2006. Moreover, the main reasons behind her divorce were citing " the stresses war places on military spouse and families".

Nevertheless, we don't have any idea if they share children or not from their married life. Moreover, Tulsi remains unmarried until 2015. However, in 2015, she again got married to freelance cinematographer and editor Abraham Williams. Apart, he is the son of Honolulu officer manager, in a traditional Vedic wedding ceremony, wearing blue silk.

Since after their wedding, the couple shares a strong bond and relationship between them. Besides, we don't have information about her children or her pregnancy yet. As of now, she is just enjoying a happy married life with her husband along with her jobs.

Tulsi is working as an American representative for many years. So, she might have earned a decent amount of money. However, her exact net worth figure is yet unknown. But, as per some sources, her net worth might be around $500,000. Heather Nauert is an American broadcast journalist and former governmental office with a net worth of $3 million.

Apart, she also has a YouTube channel, @Tulsi Gabbard, with 155k subscribers. According to SocialBlade, her channel earns monthly $50-$807 and yearly $605-$9.7K As of now, she is living a lavish life with her husband and family in Hawaii.