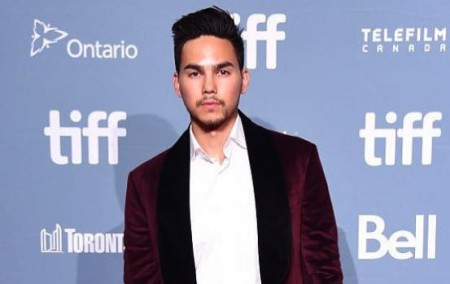 The 26-year-old, Tyler Shaw is a Canadian singer and actor who is recognized for winning the "MuchMusic Coca-Cola Covers Contest 2012." At the age of 13, Tyler learned to play guitar and began writing his own songs.

His debut single "Kiss Goodnight" was certified Gold by Music Canada in April 2013. Similarly, he released his debut studio album, Yesterday on September 4, 2015, followed by another album released in 2018. Besides singing, Tyler is involved in acting as well.

The talented pop singer was born on April 8, 1993, in Canada. He grew up in Coquitlam, British Columbia and is of half-Chinese and half-Polish descent.

The "With You" singer is married to his longtime love, Alex Karolczyk (30). The couple who were best friends took their relationship to the next level by tying the knot on August 18, 2018. They had a beautiful wedding ceremony in Ottawa, Ontario, with the presence of family and friends.

In an interview with ET Canada, he said the wedding was the best day of his life. He confirmed he'd ended the wedding night with a song he wrote for his wife, titled "With You."

On the occasion of Valentine's day in 2019, Tyler uploaded his With You wedding version video track. Till date, the video has over 3 million views on YouTube.

They do not share any children but might be planning soon for a new member. Tyler and Alex have been married for over one year as of 2019.

There is no additional information about Alex, other than being the wife of her longtime lover, Tyler. She is four years older then Tyler, but they look incredibly well with each other.

As a singer and actor, Tyler Shaw has maintained a net worth of $500,000 as of 2019. While studying at the University of Prince Edward Island, Tyler, with the help of his friend, took part in the Coca-Cola MuchMusic Covers Contest 2012. The primary source of his income is singing, and he earns additional earnings from tours and albums.

Most of his songs have been blockbuster, and Shaw is rising as one of the most-sought singers in Canada. He has released two studio albums, Yesterday in 2015 and Intuition in 2018. Just for the information, Canadian artist like Carly Rae Jepsen and Kayla Wallace has a relatively higher income.

Apart from singing, Shaw is involved in acting as well. He made his acting debut in the Canadian independent film, The Meaning of Life. Also, he appeared in an episode on the Canadian drama series Lost & Found Music Studios.

Currently, Tyler is focused on building his singing career more profoundly. He also supports various charity programs such as We Day and has appeared at many of their shows and events.