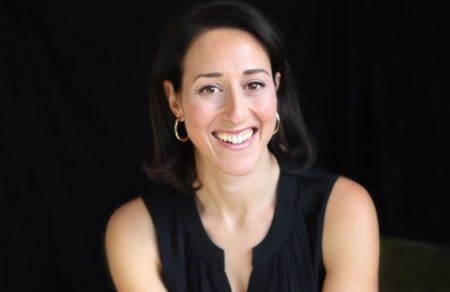 Vanessa Kroll is the founder of "Dynamo Girls," a program that builds girls' self-esteem through sports and puberty education. She is also one of the Board members of Jewish Women's Archive. Kroll is the daughter of an American businessman, Jules Kroll. Additionally, her British-American husband, Roger Bennett is a journalist, podcaster, and filmmaker.

The 44-year-old, Vanessa Kroll is married to her longtime husband, Roger Bennett. The couple exchanged their wedding vows on October 28, 2000. Further, their marriage ceremony took place at Vanessa's parents' house in the presence of friends and families.

Vanessa and her husband, Roger, has four children, three sons and a daughter. The oldest child, Samson Bennett, was born in 2002. The identity of their second child is still a mystery. Meanwhile, the third child is a daughter, Zion Bennett, while the youngest is Ber Bennett.

Vanessa often shares about the importance of parenting and children's needs on her blog and social media. Despite their busy schedule, Kroll and her broadcaster husband spend as much time with their kids.

The 50-year-old, Roger Bennett is one of the most famous football broadcasters. With partner Michael Davies, he founded a New York City-based tv show, podcast, and digital brand called, Men in Blazers.

Bennett and his production partner create content on NFL, NHL, and golf. He has filmed several football team's managers and players including Jose Mourinho, Wayne Rooney, Pep Guardiola, etc. Roger is a co-author of few best-selling books and has worked for tv networks like HBO.

There is no exact information about Vanessa Kroll's net worth. Although she is a celebrity wife, Vanessa herself is a very independent woman. Meanwhile, her spouse, Roger Bennett, has a net worth of $2 million as of 2020.

After graduating, Vanessa worked for her father's company, Kroll Associates, a security and investigations company. She worked as a research associate. Vanessa is Jewish, and she is on the board of Jewish Women's Archive. Further, her mother is the president of the National Foundation for Jewish Culture.

Currently, Kroll is the founder of Dynamo Girls, a program for building girl's self-confidence through physical activities and education. She noticed the lack of opportunities for her daughter to play sports in the joyful environment.

Additionally, Kroll works with families and staffs for the welfare of the kids. She is active on building a girl's self-esteem from an early age.