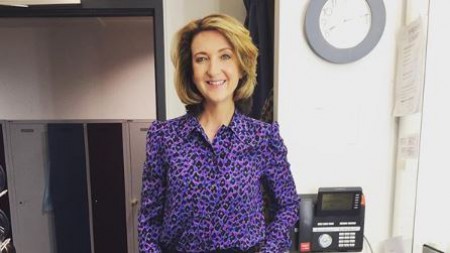 Who is Victoria Derbyshire?

Apart from her journalism career, Victoria is also an author and has a wrote a book called, Dear cancer which is about her breast cancer diagnosis and treatment. Following her treatment, she married her longtime partner Mark Sandell and they have two children. So, let's know in full detail about their personal life and relationship status.

Victoria Antoinette Derbyshire was born on October 2, 1968, in Ramsbottom, Lancashire, England. Her nationality is English and belongs to the white ethnic group. As of 2019, she is 50 years old and her birth sign is Libra. Just like british journalist Alexis Green and Bee Tucker, Victoria has been able to leave her footprint in the media industry.

Further, Victoria's parents are Pauline and Anthony Derbyshire. Talking about her education, she attended Bury Grammar School for Girls before studying English language and literature at the University of Liverpool. Afterwards, she attended a postgraduate diploma course in radio and TV journalism at Preston Polytechnic currently known as the University of Central Lancashire. A sad fact is that Victoria once revealed that her father Anthony physically abused her, her mother and her younger brother and sister.

In 1998, Derbyshire worked as a reporter in local radio and joined BBC radio 5 Live as a co-presenter along with Julian Worricker. She has worked several television news and political programs including News night, This Week, and has been sent to cover some of the biggest global stories such as 9/11 attack, the Paris Concorde crash, general elections, World Cups and Olympic games.

Talking about Derbyshire's marital status, she is a married woman and is happily relishing her solidarity with her husband. She married her longtime partner in 2018 despite being together for more than fifteen years. Victoria and her husband are the proud parents of two lovely children. So, let's know in full detail about her personal life.

Who is Victoria Derbyshire's Husband?

Derbyshire married her longtime partner, Mark Sandell in July 21, 2018, after being together for sixteen years. The couple married in beautiful wedding ceremony in front of families and friends. Victoria's sons walked her down the aisle and she said that it was her life's best moment.

Despite being together for so long, the broadcaster asked her partner to marry after she was diagnosed with breast cancer in 2015. However, the couple waited for a right time to be the husband and wife.

As per reports, Victoria had an affair with Sandell at BBc Radio 5 Live while he was still married to fellow presenter, Fi Glover. Nonetheless, Victoria and Mark are happy from their relationship and they has two sons Oliver (14) and Joe (12).

In August 2015, Victoria announced on Twitter about her Breast Cancer. She revealed she had been diagnosed and would be having a mastectomy. However, during the treatment, she continued to present her program.

Victoria has worked on a number of television news and political programs throughout her career. Hence, she has an amazing financial status. So, how much is her exact net worth? Well, as per reports, Derbyshire has a net worth of over $4 million. The primary source of her income is media journalism where she has worked for a long time.

How much is Victoria Derbyshire's Salary?

As a BBC Journalist, the presenter of current affairs and debate program, Victoria earns an annual salary of over $120,000. Considering her earnings, we can say that she makes a hefty sum of income.

The talented journalist and broadcaster, Victoria Derbyshire has won several awards throughout her career. In 2009, she won the NICk Clarke Award for an interview with a man accused and then cleared of date rape.

In 2011, she won the Gold award for Best News & Current Affairs program. Likewise, in 2012, she won the Sony Academy's Speech Broadcaster of the Year. In 2017, she won a BAFTA Television Award for her interview with four footballers about the alleged sexual abuse. Moreover, in March 2018, she won two Royal Television Society Awards - Network Presenter of the Year, and Interview of the Year.

Throughout her career, Derbyshire has been criticised for several interviews. Recently in 2019, she accidentally referred to a politician, Jeremy Hunt as 'Jeremy C*nt'. Later, she apologised for the remark.

Stay on marriedceleb for more details.