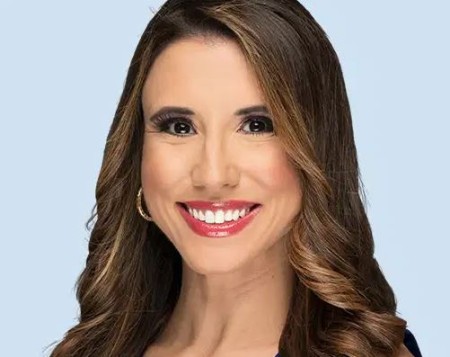 Vivian Gonzalez is one of the most recognizable faces in weather reporting. She has been working for Fox affiliate tv station, WSVN as a morning/noon meteorologist since November 2012. A passionate woman, Vivian is a member of The National Association and American Meteorological Society.

Vivian was born on March 23, 1983, in Miami, Florida, the United States. She is 37 years old and has a twin sister. Vivian has a dual Bachelor's degree. She received her Geosciences degree from Mississippi State and B.A. in Geography from Florida International University. Additionally, Gonzalez has acquired the American Meteorological Seal of Approval.

Vivian Gonzalez has been married to her husband, Jorge Gonzalez since April 24, 2010. The husband-wife duo has been together for over ten years as of now. Vivian and Jorge has a daughter named Emma Marie Gonzalez. She was born in 2017 and shared the same birthdate as her mother. Like Vivian, Melissa Mack is also a happily married woman.

Vivian's husband works as an underwriting manager of Federated National Insurance Company located in Florida. From 2012-2016, he worked as a president and general managing agent of Insure-Link.

On the occasion of their tenth wedding anniversary, Vivian shared a picture of her wedding day and credited God for giving her a wonderful family. The couple is in no rush to welcome a second child and is far away from controversies. When she is not working, Vivian likes cooking, watching movies and spending time with her family.

Gonzalez has nearly two decades of working experience in the weather reporting profession. As a meteorologist, she earns an annual salary of over $75,433 similar to former WSVN meteorologist, Felicia Combs. As of 2020, Vivian Gonzalez has an estimated net worth of $1 million.

The average salary for meteorologists ranges somewhere between $48,466-$93,213 per year. Hence, Vivian is surely earning a desirable income from her longtime weather reporting career. Besides, she is a volunteer who takes part in different philanthropy works.

Vivian is active in charity works as well. She teaches math and science to children as a part of the community teaching program. She volunteers for the Homeless and Habitat for Humanity and supports La Liga Contra El Cancer.

Since her early childhood, Vivian wanted to work as a weather reporter. She was always fascinated by the environment and natural phenomena. After graduating, she joined 7News in 2005 as a weather producer.

In 2012, Vivian began working for fox affiliate television station, WSVN. Since then she has been working as a morning and noon meteorologist.