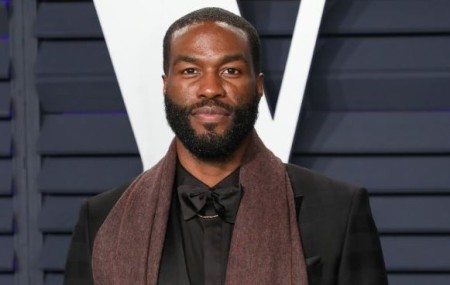 Yahya Abdul-Mateen II is an American actor and architect, well known for his appearance as Cadillac in the Netflix series The Get Down, and Black Manta in DC Extended Universe movie Aquaman.

In 2019, Yahya appeared in the 2019 HBO television series, Watchmen, along with renowned actors such as Regina King and Don Johnson. The 33-year-old actor was born on 15th July 1986, in New Orleans, Louisiana, U.S. Born to his Muslim father Yahya Abdul-Mateen I, and Christian mother Mary, Abdul II holds an American nationality. The name Yahya is Arabic, and his father's name was John before converting to Islam.

Is Yahya in a relationship or single?

The famous actor seems to be living a single life. Moreover, Abdul has not been spotted dating anyone to date; neither he wishes to talk about it.

Besides, Yahya loves to spend time with his family members, as he mentioned that family means everything to him. Looking at his Instagram posts, Abdul seems to be a fitness freak as he manages to visit the gym regularly.

On January 8, 2020, Page Six published an article about the actor having breakfast in Manhattan with the Power's actress, La La Anthony. However, Anthony is in a relationship with a basketball player, Carmelo Anthony. They were married in 2010 but separated in 2017. As of 2020, Anthony and Carmelo are back together.

So, what happened between Yahya and La La Anthony? Well, a close source reports that they are just good friends and have been working out together. Therefore, Aquaman's Black Manta is currently single, as mentioned above.

Started his Acting Career as a Stage Actor

Before stepping into acting, Abdul-Mateen II graduated in various fields. In 2004, he joined the Alpha Phi Alpha fraternity and completed his training as a hurdler in for California Golden Bears.

Yahya, moreover, received his degree in architecture via the University of California and worked in SanFrancisco as a city planner.

However, Abdul wanted to become an actor since his childhood and joined the Yale School of Drama, graduating with a Master of Fine Arts. Soon, he began serving as a stage actor.

Made his first television appearance in 2016

After working as a stage actor for many years, Yahya did his debut television appearance in the musical drama series The Get Down, aired via Netflix. He also appeared in one of the famous movie Aquaman.

On 25th May 2017, Abdul-Mateen played as a police officer in the action comedy film Baywatch, along with Dwayne Johnson and Zac Efron, Garner Ellerbee. Seth Gordon directed the movie.

In March 2019, it was announced that Abdul-Mateen would appear on Netflix's science-fiction anthology series, Black Mirror, in the fifth season.

How Much Net Worth Does Yahya Abdul-Mateen Accumulate?

Yahya Abdu-Mateen II makes decent money from his career as an actor and architect. To date, Mateen has made his appearance in various movies and television series, which adds up to his current net worth.

Some of the earnings from Yahya's hit movies are listed below:

Just for the information, Yahya is set to appear in the fourth installment of The Matrix franchise. His salary in the Watchmen series is estimated between $150,000-$250,000. Hence, the actor lives a lavish lifestyle and has still a lot to achieve.

Stay updated to know more about your favorite star and follow marriedceleb.com!