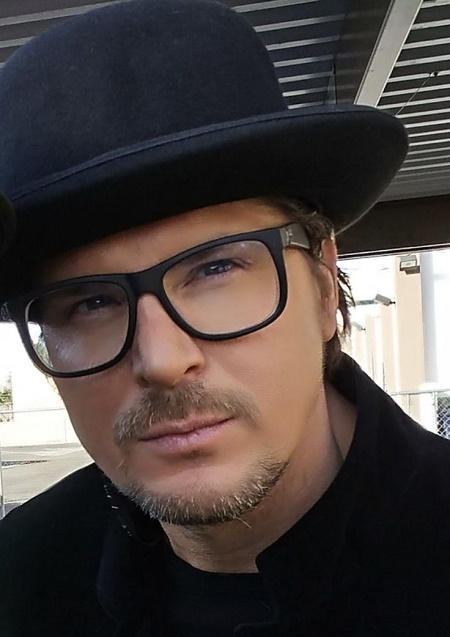 Zak Bagans is an American paranormal investigator, TV personality, museum operator, and actor. He is best known for working as a principal host of the paranormal documentary and reality television series, Ghost Adventures. It runs on Travel Channel.

He has also founded one of the world's largest networks of trained paranormal investigators, Ghost Adventures Crew (GAC). Keep scrolling to know more about his personal life.

Yes, Bagans, the 43-year-old TV personality, has a new woman in his life. She is none other than Holly Madison, the American model and author. A source confirms to PEOPLE, they are officially dating privately.

They had their first interaction years before but they reconnected when Madison, 40, came to visit Zak's Las Vegas-based Haunted Museum in May 2019.  Afterwards, the couple started talking romantically and began dating.

Also, TMZ has confirmed in June that they are officially an item, saying " we've learned the two are dating!!!". However, the "Ghost Adventures" star and the former Playboy model has kept low key about their relationship.

Their new romance glittered just four months after Holly finalized her divorce from her ex-husband, Pasquale Rotella in February after five years of marriage. He is an Electric Daisy Carnival founder. They have two kids, a daughter Rainbow Aurora, and a son Forest Leonardo Antonio.

Past Love Affairs Of Zachary

Before Holly, he had been in a few other failed love affairs in the past. At first, he started dating a late-model and make-up artist, Christine Dolce in around 2010. But sadly, Christine who was also known as Forbidden died of liver failure in February 2017 after struggling with substance abuse.

Later on April 1, 2014, Bagans, the 1.82 m tall announced that he was going to marry his future wife, Ashley Mallette. She is a former model. Through his Twitter post, he said that they were already engaged. However, their engagement announcement was just a Fools’ Day joke.

But the couple didn’t marry because of unrevealed causes. Further, Zak was rumoured to be dating Marcy DeLaTorre. But they never admitted their connection openly.

As of 2020, Zak Bagans has a whopping net value of $30 million which is alike to Kathy Griffin. He has accumulated his fortune throughout his successful career as a paranormal investigator, actor, television personality, and museum operator.

Bagans moreover makes million dollars for serving as the lead investigator, executive producer and editor in the show Ghost Adventures. It was originally released on October 17, 2008, on the Travel Channel. It stars other ghost hunters Nick Groff (2008–2014), Aaron Goodwin, Billy Tolley, and Jay Wasley.

More, in 2012, he launched his private clothing line called DungeonWear. As an author, he has published various hosting books including Ghost-Hunting For Dummies, Darkness Optional: The Holy Truth, I Am Haunted: Living Life Through the Dead. His co-writing book with author Kelly Crigger named Dark World: Into the Shadows with the Lead Investigator of the Ghost Adventures Crew became The New York Times Best Seller list at No. 18 in 2011.

Bagans' Museum and Other Properties

Zachary operates and runs the Haunted Museum named Zak Bagans' The Haunted Museum in Las Vegas, Nevada. It was opened up to the public in October 2017. It runs on the Travel Channel and has 33 rooms with a selection of haunted mementoes from his personal collection.

In addition, he owns $2 million worth of assets and the real museum building the residences. Bagans paid $1,888,888 for a home in Los Angeles in October 2019, where supporters of Charles Manson murdered a married couple named LaBianca in 1969.

Bagans was born on April 5, 1977, in Washington, D.C., the United States as Zachary Bagans. He is the youngest son of late Larry Bagans, who was a salesman at the Quaker Oats division of PepsiCo and Nancy June Knapp, 72, an interior designer and visual stylist. His dad, Larry died on December 13, 2018, at age 71.

He has one biological older sister Meredith Bagans, born on June 4, 1974. She is married to husband, Michael Mixer, with whom she shares two kids, Morgan and Maddox. Also, he two maternal half-brothers, Sky Knapp and Phil Knapp from his mother's second marriage to Thomas Knapp.

Concerning education, Zak is a graduate of Glenbard West High School. So far, he holds American citizenship and is of white ethnicity.