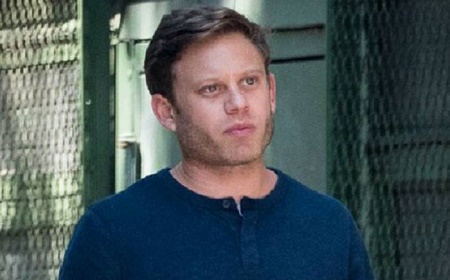 Zandy Reich is an American businessman who is currently serving as the president of the AYR clothing company since 2014. Further, he has worked at Goldman Sachs as well as at Renaissance Capital and Theory. Rather than his own work, he got huge popularity as the husband of former Glee star Lea Michele.

He was born on 24th January 1983 in the United States of America. He is of American citizenship and belongs to the white ethnicity. So far, he is a graduate of the University of Pennsylvania and received his finance degree in 2005 from Wharton School of Business.

The 5ft and 9inches tall Zandy and his two years of girlfriend, Lea Michele, 33, got hitched on Saturday night, on 2 March 2019. They walked down the wedding aisle at a romantic private ceremony at Napa’s Carneros Resort in California.

For their big, Reich, 37, a Philadelphia native wore the blue casual dress while the beautiful bride chooses to wear a strapless white gown by designer, Monique Lhuillier. Their marriage was officiated by Glee and Scream Queens creator Ryan Murphy.

The day was attended by family, friends, and a few familiar famous faces including Glee co-stars Darren Criss and Becca Tobin. And actress Emma Roberts also attended the day. Reich's brother Spencer was the best man while Jonathan Groff (best friend of Lea) was a man of honor.

“We are so excited to be married and grateful to be surrounded by our friends and family,” the couple said People. And most of all, we’re so happy to spend the rest of our lives together" they added.

When Josh and Lea Started Dating?

Things turned romantically between them after having been friends for a long time, and they started dating in July 2017. Their dating rumors sparked when they were seen holding hands in New York City after having lunch together.

On Saturday 28 April 2018, his two-year girlfriend, Michele revealed they're engaged via Instagram. The actress posted an image of her holding diamond ring on her finger with the simple caption, "Yes"

Baby is on the Way

Yes, the newlywed's duo Zandy Reich and Lea Michele are expecting their firstborn child together. Michele, the three Grammy Award nominations, announced her pregnancy by posting the sweet photo of her baby bump on Instagram on May 2, 2020.

In the photo, she cuddled her belly lovingly in her hands while wearing a long blue dress. "So grateful," she wrote alongside the image. But so far the couple has not confirmed the exact due and sex of an unborn infant to the media.

What is Zandy Reich's Net Worth?

Zandy Reich has quite a good amount of earnings as a famous business person. Working in the business filed for over a decade, he has successfully managed to collect a million fortune within himself. Today his actual net worth is still under investigation but it is assumed to be more than $500 thousand as of 2020.

Meanwhile, his wife, Lea Michele Sarfati has a staggering worth of $12 million. She acquired her wealth from her acting, singing gigs. In fact, she's reportedly earning $80 Thousand in TV shows per season. Not just her occupation, she also earns extra money from numerous endorsements and commercials such as L'Oreal, Zola, HP, Dove, Hello Fresh, etc.