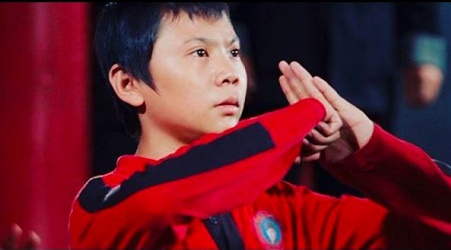 A Chinese born movie actor and a black belt Martial arts instructor, Zhenwei Wang made his first film debut as Cheng in the remake of the film, The Karate Kid in the year 2010. Also, he is known for his works including Movie Martial Arts vs. Reality (2012), and Kung Fu Yoga Hitman (2017).

He was born on October 20, 1995, in Hebei, China to the father, Chao Wang Guo while his mother's name is unknown. But Wang moved to Beijing at an early age, to obtain a better education. He attended the amateur sports school called Jet Li's school when he was four years old. As per his citizenship, he is Chinese but ethnicity is not known to the media.

Is Zhenwei Wang Married or in a Relationship with Someone?

The 24-year-old martial artist is an unmarried man and is happily single at the current moment. And the truth is that he is a very discreet kind of man when it comes to revealing the matter of his personal life. Thus, his current relationship status remains private or distant from the highlight.

Not only that, but there is no evidence that he's in any connections or dating up to now. So, he must concentrate on his future, rather than dating girlfriends or lovers. For now, he is enjoying his free time with his family and karate teams.

So far, the 1.66 m tall Wang regularly uploads a photo on his Instagram account, flaunting his wonderful body physics. Therefore, being such an attractive guy his fans still speculating that he is in a secret relationship with someone. Who says what? But unfortunately, he has not leaked any short details about it to any press until now.

After a couple of years of hard work and commitment, Zhenwei with his dedication and solid martial arts base received high praise from the Wushu industry. At an early age, he received numerous awards at national competitions.

At first, Zhenwei won two gold medals from the Beijing Wushu Youth Competition. Two years later, he came in first out of fifty-seven athletes when he was 10 when the Wushu national team went in search of new members.  And he joined the national performance of the Wushu B-Mannschaft effectively.

At fourteen,  he finally made his debut appearance as Cheng in The Karate Kid's 2010 remake. Throughout the film, he identified himself with the actor Jaden Smith. He portrayed one of Smith's on-screen competitors in The Karate Kid, a rebellious, sadistic, and ruthless kung fu prodigy.

How Much Net Worth Does Zhenwei Wang Have?

Working as a Martial arts expert and movie actor, Zhenwei Wang earns a good amount of money. As of 2020, his astonishing net worth is estimated at more than $700 thousand which is similar to another Martial Arts Instructor, Miyako Fujitani. The primary income source of his money is his professional Martial career.

Similarly, the average salary for the Martial Arts Instructor is about $17.50 an hour or $45,371 an annum. Now, looking at his experiences as a well-known martial arts teacher, he might make a monthly salary of over $40, 000 a year. Likewise, his starred 1984's American martial arts drama film The Karate Kid grossed $91.1 million worldwide on the budget of $8 million.