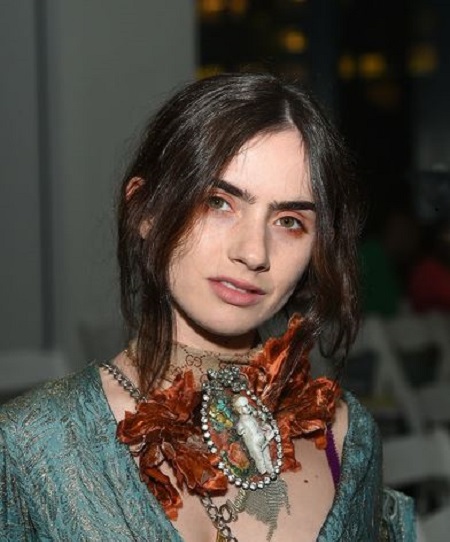 The LA-based Zoe Sidel is a rising actress, model, designer, and socialite who starred in American horror-thriller film, The Institute in 2017. But rather than her own profession, she is widely famous as the single daughter of renowned actress Rosanna Arquette, and her third husband, John Sidel, an restaurateur. Her mother Arquette is known for portraying as Roberta Glass / 'Susan' in the film Desperately Seeking Susan (1985).

Zoe Bleu Sidel was born on October 23, 1994, in Los Angeles, California USA. Further, she is the granddaughter of film actor Lewis Arquette (died on February 10, 2001), and Brenda Denaut (died on August 6, 1997). Her uncles are David Arquette, Richmond Arquette and aunts are Patricia Arquette, Alexis Arquette. So far, she holds American citizenship and is of mixed ethnicity.

Does Zoe Sidel Have Boyfriend?

Yes, the beautiful and good looking Zoe is no more single. At the current moment, she is in a romantic and healthful love relationship with her boyfriend, Thomas Cohen. He is a Musician who is the retired frontman of a rock band named S.C.U.M.

25, Sidel and Thomas, 30 are officially off the market. The pair who started dating in November 2016 made their first appearances together in London. Nevertheless, they became a couple after Cohen's short term love romance with 31 years old Daisy Lowe, a fashion model. They parted ways after five months of dating.

As of now, Zoe who attended Sarah Lawrence College in New York and her beau Thomas has completed their 3 years of togetherness. It seems this cute couple is very much in love with each other and early waiting for their big day.

Her Boyfriend, Cohen Is A Widow Man

Yes, you have read that correctly. Thomas, the son of Keith Cohen, and Sue Cohen became a widow at the age of 23. He has nothing to hide.

Well, the film director Arquette has been married four times in her whole family. As of now, she is enjoying her blissful married life with her fourth husband, Todd Morgan, an investment banker. They got hitched in August 2013 after a two-year engagement in 2011.

Not only them but she had also a love affair with Toto keyboardist Steve Porcaro in the 1980s. She further was in a romantic relationship with the English musician, Peter Gabriel.

What is Zoe Sidel's Net Worth?

Working as an actress, model, designer, Zoe Sidel must be making a considerable amount of sum. Although her exact amount of net worth has not been disclosed any sites, it is believed to more than $500 thousand.

As a fashion stylist, Sidel has worked in various programs and also collaborated with artists Arielle Chiara and Darius Khonsary. Morever, she landed the lead role in James Franco's film The Institute in 2017. Asides it, she has a written poem book named Please Don't Bleed On My Antfarm.

Meanwhile, her mother, Rosanna Arquette now enjoys a staggering net worth of $20 million. Her main income source of earnings is her acting, film directing and, producing career. Her career highlights include Desperately Seeking Susan(1985), Crash (1996), The Big Blue (1988), and Pulp Fiction (1994).