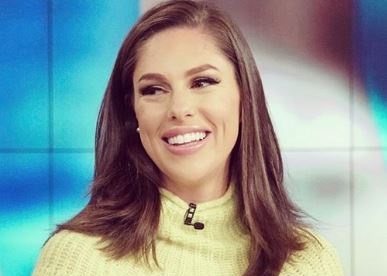 Abby Huntsman is a well known American television personality and journalist. She is currently co-hosting ABC's The View. She has been working as a general assignment reporter for Fox News Channel and was the co-host of Fox & Friends previously. Journalist like Ellison Barber and Jillian Mele is currently working on the Fox News Channel.

Abby was born in Philadelphia, Pennsylvania, in the U.S. on 1st May 1986. Currently, she is residing in New York City. Her father is former Utah Governor, Jon Huntsman Jr, and mother Mary Kaye Huntsman is an American activist. She is also known as the granddaughter of Jon Huntsman Sr. who is a famous American businessman Philanthropist.

Abby and Jeffrey first came to know each other during their college days at the University of Pennsylvania. They were known to be a great pal, and then that friendship leads them to date one another for a long period of time.

After graduating from the University, the pair shared their wedding vows in August 2010. Their wedding took place at the Washington National Cathedral which was performed by the Rev. Samuel T. Lloyd III who is an Episcopal priest.

After seven years of marriage, they decided to take their nuptial relationship to the next level. In November 2017, the pair welcomed their first child, daughter Isabel Grace. Later on June, she gave birth to twins in New York City and named them William Jeffrey, Son and second daughter, Ruby Kate. Abby's father and mother came to witness their twin's grandchildren straight from Moscow.

In April, The View even threw a baby shower for Abby and Sara Haines where she opened up on her pregnancy cravings. The pair are often seen uploading their children's photos on their social sites account. Being a busy parent they are still taking very good care of their children. Jeffrey even sometimes babysit for their children. The family of five is now living a happy and prosperous life.

The Net Worth of Abby Huntsman

Abby has an estimated net worth of $20 Million. She has been one of the remarkable personality, through her outstanding career, she earned a massive amount of fortune. Being one of the experience television personality, she is surely paid a good amount of remuneration from her job without a doubt.

Some of the sources have revealed that her annual income is more $2 Million. However, it has been officially confirmed. She is currently living with her husband and kids in New York City.

Abby's father and grandfather are a well-renowned personality in the world. Her grandfather used to hold a net worth of $3 Billion back in 2018. He died on 2nd February 2018 at the age of 80. Their family has been engaged in many charities and social works.

Forbes reportedly revealed that the family of Late Billionaire Jon Huntsman to give $150 Million for Mental Health at U of Utah and has given $1.5 Billion focusing on areas of cancer research programs at various universities and aid to Armenia.

Furthermore, his father Jon Huntsman Jr. holds one of the powerful jobs in the world and has been presented as Ambassador of the United States for more than decades-long in many countries. He holds an estimated net worth of $2.5 Billion.