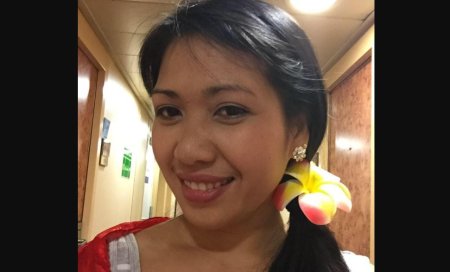 It's a good thing to see a person who was born in rejoice but faces hurdles of life that are hard to finish. A death can break a long lasting bond in seconds and gives us a tragedy for a lifetime. Just like this, Airyn Ruiz Bell found herself in the same situation when her husband, Art Bell, died.

Bell was born in 1984 in the Philippines and hails from Austronesian descent. She holds dual citizenship of the United States and the Philippines. What's her current relationship status? To explore more about Bell's personal life, read along.

The 36-year-old Ruiz Bell is reportedly single, but people are interested to know about her intimate life. Nevertheless, she maintains a low profile life and less appears in the media's limelight, especially after her spouse died.

Airyn is currently a full-time mother at her home and raises her two adorable children, Asia and Alexander. As of now, she is busy in her household works so that she has no time to get into a new relationship after the tragic death of Bell.

Airyn and her late husband, Art Bell, walked down the aisle on 11th April 2006. The bridegroom's marriage was a small and private ceremony attended by their beloved families and close friends.

Before their marriage, Airyn's husband hinted that he would soon take a "huge risk" and "do something rash" in his life in January 2006. On 15th April 2006, Art disclosed a mystery of his significant life decision about his newly married life with Airyn in the media.

Airyn and Bell welcomed their first child, Asia Rayne Bell in 2007, just a year after their marriage. The pair then became the parents of their second baby boy, Alexander William Bell in July 2017.

Two months after the birth of their second child, Airyn's husband died due to accidental drug overdose on 13th April 2018 in Pahrump, Nevada, at the age of 72. In July 2016, it was found that Art was suffering from chronic obstructive pulmonary disease and hospitalized for pneumonia.

Airyn's beloved spouse, Art, was first committed to Sachiko Toguchi Bell Pontius. The duo walked down the aisle in an intimate ceremony in 1965, where their closest relatives and friends were present.

After sharing three years in a blissful marriage, the couple eventually separated in 1968. They then finalized their divorce, and Art took the custody of their two children, Vincent Pontius, and Lisa Pontius Minei.

Art then got married to his second wife, Vickie L. Baker, on 1st March 1981. Following their grand ceremony, Vickie gave birth to a baby boy, Arthur William Bell IV (Art's 4th child). The pair's marriage was going in a right way, but something happens in their relationship, which is not known that changed the direction of their path. They then divorced on 3rd July 1991 after staying married for a decade.

Upon their divorce, Ramona Lee Hayes on 4th August 1991. More to that, the pair's wedding was a closed ceremony, which was held between their close friends and family relatives.

The couple's marriage only lasted for 15 years after the unexpected demise of Ramona on 5th January 2006; at the age of 47. The cause of her death was an acute asthma attack when they were on a short vacation in Laughlin, Nevada.

Airyn and Art Bell sued an American radio host, Michael Savage, for accusing false statements about their marital relationship. Their case took place in the United States District Court for the Northern District of California on 30th November 2017.

According to the court's reports, Michael accused by saying,

“You say ‘UFOs,’ you wind up in the Philippines with a 10-year-old hooker, and you are off the radio after a number of years...That’s an in-joke, by the way, for people who understand the business.”

Savage stated Airyn and her husband's life, where he stated that Art tied the knot with his fourth wife in the Philippines. It was directly said to Bell's family. It was also proclaimed that Savage demonstrated Bell to be a prostitute in the Philippines. But, Bell wasn't involved in any illegal activities.

For this reason, Bell requested the court for the legal costs and damages for the defamation statement. But, the court ordered both parties to take their report back in 30 days because it was a salacious claim which never stated to be harmful to both parties.

Airyn Ruiz Bell's professional career is not known as of now. That's why any details regarding her net worth are not known. However, her late husband, Art, had a lucrative fortune of $10 Million as of 2020. He earned an impressive salary throughout his radio broadcasting works. Similar to Art, Brandon Lee also grabbed a substantial income from his professional works before his demise.

Check out the trailer of The Day After Tomorrow

Bell's late marital partner, Art, wrote his first book, The Art of Talk, on 1st September 1998. The book is about the whole life of an American radio host that shows the behind-the-scenes.

Art then published his second novel, The Quickening: Today's Trends, Tomorrow's World on 1st September 1997. The book further garnered four out of five stars from 53 ratings through the readers.

Art's other notable books are The Coming Global Superstorm, The Source: Journey Through the Unexplained and Comedy Central's Web Sightings. Likewise, some other authors like Ted Nicholas also wrote bestselling novels.