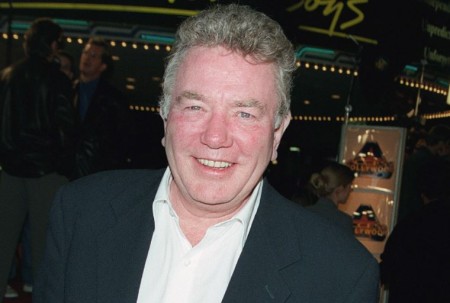 The five-time Academy Award nominee, Albert Finney was an English actor who accomplished a successful career in theater, film, and television. He is best known for appearing in movies such as Tom Jones, Murder on the Orient Express, The Dresser, Skyfall, among others. Unfortunately, he passed away on February 7, 2019, at 82.

Albert Finney was born on May 9, 1936, in Salford, England. His parents were Alice Hobson Finney, a housemaker, and Albert Finney, a bookmaker. Albert graduated from the Royal Academy of Dramatic Art (RADA) in 1956.

Throughout his life, Finney was married thrice and had only one son. His third and last wife was Penelope Delmage. They remained together until Albert's death. Penelope "Pene", who grew up in Sussex is a former travel agent.

It is not known when they first met each other, but they got married in 2006. Further, Albert and Pene remained as husband and wife for 14 years. They didn't share any children.

Past Wives and Kids

Now talking about Finney's previous marriages, his first wife was an actress, Jane Wenham. Jane was a film and television actress who died in 2018, one year before Finney's death. They were married for four years from 1957 until 1961. However, the reason for their divorce is still unknown.

After nearly ten years of his first divorce, Albert then married actress Anouk Aimee in 1970. Anouk is a French actress who has worked in more than 70 films.

She won the Golden Globe and BAFTA Award for starring in the 1966 movie, A Man and a Woman. Similarly, Anouk was nominated for an Academy Award as well. Sadly, her marriage with Finney lasted for only eight years.

One of the successful actors of theater, film, and television, Albert Finney had a net worth of $10 million at the time of his death. Throughout his career, Finney had starred in multiple blockbuster films and tv shows. Another popular actress of the 1960s, Jean Hale also has a stunning fortune.

Here, take a look at some of his movies' box-office collections.

For starring in Tom Jones, Finney received 10% of the film's earnings which was over $1 million. Similarly, he also received a generous sum of money from Murder on the Orient Express, where actor Sean Connery also had a vital role.

In May 2011, Finney publicly opened about his battle with kidney cancer. He also shared his journey of receiving treatment. However, as per the 2012 interview, Albert had been diagnosed with cancer five years earlier. He underwent surgery and then had six rounds of chemotherapy.

Watch some of Albert's movie clips!