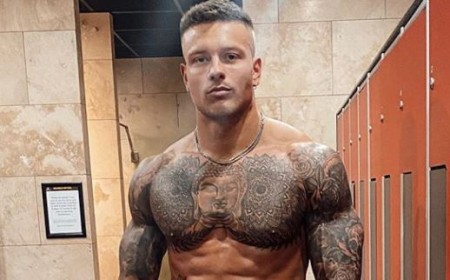 Alex Bowen is a British model and reality tv star best known for appearing on ITV2 dating reality series, Love Island in 2016. He became the show's runner-up with his now-wife, Olivia Buckland. Before earning his television fame, Bowen was a fitness and fashion model.

Alex was born on July 23, 1991, in Wolverhampton, England, the United Kingdom. His mother, Mithcell raised him as a single mother. She is now married to Louise Hall so Alex is his step-son. Meanwhile, Alex never met his biological father. Further, he is close to his grandparents.

The 29-year-old handsome hunk, Alex Bowen is married to Olivia Buckland. The couple first met in 2016 on ITV2 dating reality series, Love Island. After six months of dating, Alex popped the question in December 2016. The two were on a vacation in New York.

Alex and Olivia tied their knot on September 15, 2018, in front of over 100 guests at Gosfield Hall in Essex. The groom amazed the crowd by turning up in a helicopter. Meanwhile, Olivia was excited and couldn't stop herself from crying.

They became the first Islander couple to get married. Late Caroline Flack who presented Love Island also congratulated the pair. For their honeymoon, the reality star lovebirds went to Sri Lanka. Besides, they have travelled to Greece, Barbados, and Dubai for vacation.

Alex wants to be a Young Dad!

When talking about welcoming a child, Alex revealed that he wants a baby while he is young. However, Olivia said that a baby will bring a lot of responsibilities and she is just not ready to be a mother currently. The pair have been married for over two years. They share two French bulldogs named, Reggie and Winnie. Recently, they got a horse named, Dolly.

After Love Island, Alex and his wife appeared on their own reality series. TLC Network documented their married life in the show, Olivia and Alex Said Yes and Olivia and Alex: Happily Ever After. It seems they are more focused on expanding their business rather than starting a family right away.

The most raunchy short-lived affair of Alex was with former Love Island cast, Zara Holland. After arriving less than 24 hours on the dating show, Zara had sex with Alex which she later regretted. Afterwards, she was stripped off her title of Miss Great Britain.

Zara confessed: “You know when you’re in the moment and it just happens. That’s really not like me at all. Why couldn’t we have just gone to sleep?”Meanwhile, Alex defended himself of having intercourse with Holland on the show.

Alex Bowen has a net worth of $2.5 million, while his wife, Olivia's net worth is $3 million. Bowen collected such impressive wealth from tv shows and his career as a fitness/fashion model. He is the founder of ABX Performance, a website through which clients will get his workout programs and nutrition plans.

Meanwhile, Alex has modelled for BoohooMan and Gym King. He earns around $645,000 a year from the PA circuit. Along with his wife, Bowen secured a lucrative $32,000 magazine deal.

Do you know the pair was listed on the Heat magazines Under 30 Rich List in 2019? At present, they are business partners and owns a clothing line called Exempt Society. The couple also earns decent money from social media. Alex has 1.6 million, while Olivia has 2.5 million Instagram followers as of October 30, 2020. They reportedly earn $2,500 per Instagram post.

Talking about luxury possessions, the pair owns a house in Essex worth $777,4000. Alex also owns a stunning Mercedes Benz for his ride.