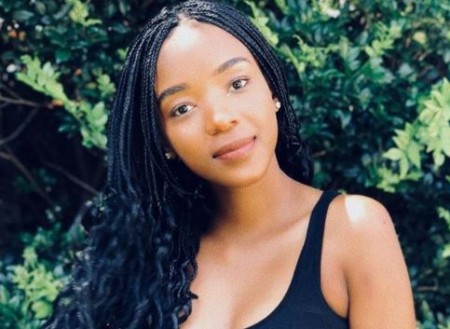 Ama Qamata is a young, bright, and energetic South African actress. She is best known for playing the role of Puleng in Netflix's second African series, Blood and Water. She first gained wide praise for her role as Naledi in the SABC series, My Perfect Family. Likewise, Ama is known for playing Buhle on the Mzansi Magic crime series, Gomora.

Ama was born as Amamkele Qamata on September 2, 1998, in Cala, Eastern Cape, a town in South Africa. She attended Reddam House School and later studied Theater and Performance at the University of Cape Town (UCT). Qamata wanted to become an actress from a young age. However, she hasn't shared anything related to her family and early life.

Is Ama Qamata dating anyone?

The 21-year-old actress is currently not dating anyone. Qamata hasn't revealed her exact relationship status, but in an interview, she expressed her desire to date a Nigerian man. It is not known whether she has a boyfriend or not because she keeps her personal life secret.

At present, the dark and bold actress is probably focused on expanding her career. She has yet to give a blockbuster on a big screen. Meanwhile, her work in television is, no doubt, a first-class act.

Ama is a fun-loving and outgoing personality. Qamata stands at 5 feet 7 inches, and she is the owner of a beautiful smile. In her leisure time, the actress loves traveling, doing adventurous stuff, and enjoying life. Recently, she was tested positive for coronavirus, but after staying isolated, Ama has now fully recovered.

The Blood and Water actress, Ama Qamata, has a net worth of $150,000 as of 2020. The primary source of her income comes from her acting career. She has appeared in popular tv series through which Qamata has amassed a decent income. The average income for a television actress in South Africa ranges somewhere between $18,000-$43,564.

Qamata has just begun her career, and she still has a long way to go in the entertainment industry. Besides acting, Ama earns a decent income from endorsements and campaigns. The rising actress also appears in cover magazines and commercials.

Qamata previously has acted in a number of television shows. However, her major breakthrough came with her role of Puleng Khumalo on Netflix series, Blood & Water. She appeared alongside South African actresses such as Shamilla Miller and Greteli Fincham.

Her work in the show helped her gain massive followers on social media. Before being a cast on the series, she had actually sent a self-taped audition to the casting directors.

Ama's first acting work was on the soap opera, Mzansi Magic. One of South Africa's biggest stars, Pearl Thusi, selected Qamata along with a group of other young women to appear in a Cosmopolitan South Africa photoshoot.