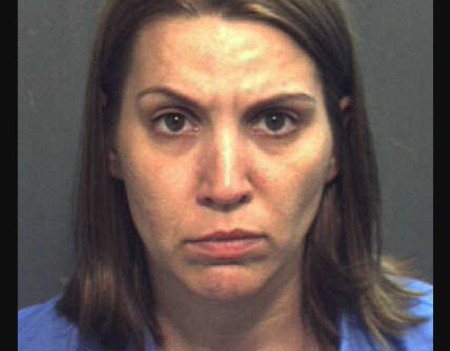 Unlike other celebrities children, Amanda Thornton Brumfield appeared in the limelight for a shocking reason. She is the estranged daughter of Golden-Globe winning actor, Billy Bob Thornton. Amanda was convicted of aggravated manslaughter after being accused of murdering her best friend's one-year-old child, Olivia Madison Garcia.

Amanda claimed Olivia's death as an accident, but she was indicted on several charges including first-degree murder, aggravated child abuse and manslaughter. Her family members created a petition to overturn her conviction. But will she be soon out of prison?

The time was October 2008, when an unfortunate event was about to shatter the Garcia family's happiness. Heather Murphy, who was Amanda's best friend, made her Olivia's godmother.

On October 3, 2008, Amanda informed officers that a child she was babysitting hit her head in a fall. But stranger thing is that she called for help more than two hours after the incident. According to Amanda, Olivia fell from her playpen and hit her head on the floor.

What happened that day is still unknown, but a baby lost her life. As per the prosecutors, Olivia's death wasn't an accident, but it was due to Amanda's neglect. Further, the autopsy reports revealed that Olivia suffered a nearly 4 inches deep fracture on her skull and bleeding/swelling of the brain.

Amanda told investigators that after hitting her head on the floor, Oliva acted normally and ate bananas. Additionally, Brumfield told she even painted the toddler's toenails, but later she noticed the child didn't move.

Sentenced for Two Decades in Prison

Amana was first indicted in June 2009 on charges of child neglect. The jury found advantages in both the prosecution and defence cases, convicting Brumfield of manslaughter. However, they acquitted her of first-degree murder and aggravated child abuse.

An article published on NY DailyNews revealed that Amanda called 911 for a medical emergency to save the life of her one-year-old goddaughter. However, the detective thought her story was inconsistent with Oliva's injuries. In October 2011, Amanda was sentenced to 20 years in prison.

Throughout her sentence, Amanda always maintained the death of her goddaughter as an accident. Further, the Innocence Project of Florida asked the state Board of Executive Clemency to pardon Amanda or reduce her remaining sentence. The organization argued that she was wrongfully convicted of a crime disproven by medical and scientific violence.

The 41-year-old Amanda was released from prison in September 2020 after she served eight and a half years. A judge signed an order that resentenced her to ten years instead of twenty. In exchange, Brumfield agreed to stop pursuing her innocence claim in the courts.

Amanda is a Mother and a Wife

The estranged daughter of Billy Bob Thornton was already a married woman before she was convicted of manslaughter. In fact, Amanda's husband was present while the incident occurred. He reportedly talked with emergency operatives after his wife called 911.

It is not known when Brumfield married her husband, but it seems they have together for a long time. The couple also has a daughter named Tiffiny Spence. Following her release, Amanda seems happier than ever.

Amanda Brumfield was born on June 30, 1979, to parents, Billy Bob Thornton and his first wife, Melissa Lee Gatlin. Her parents were married from 1978 to 1980. Billy's adultery and not being around for his family led Melissa to divorce him. As a result, Amanda grew up without her father.

To this date, Amanda and her father has a difficult relationship. As per reports, Billy cut tied with her after his divorce from Gatlin. Following Amanda's arrest, Thornton said that he wasn't present for his daughter's early life and he regretted having not spent much time with her.

Thornton has been married Six Times

The Academy award-winning, Billy's first marriage with Melissa lasted for only three years. Then, he married actress, Toni Lawrence in 1986 but divorced in 1988.

From 1990 to 1992, Thornton remained married to actress Cynda Williams. One year later, he married model Pietra Dawn Cherniak but divorced in 1997. They shared two sons, Harry James and William.

Instead of marrying his then-fiancee, Laura Dern, Billy went on to marry actress Angelina Jolie in 2000. But they divorced in 2002. Since 2014, he has been married to Connie Angland, with whom he has a daughter named Bella.

Father has an impressive Net Worth

Despite her father being a multi-millionaire, Amanda never got to enjoy a lavish lifestyle during her early childhood. It is not known if Billy provided spousal support after his divorce.

As of 2020, Billy Bob Thornton has a net worth of $45 million. Currently, he appears in the leading role of Billy McBride on Amazon's web series, Goliath alongside, Tania Raymonde and Diana Hopper.