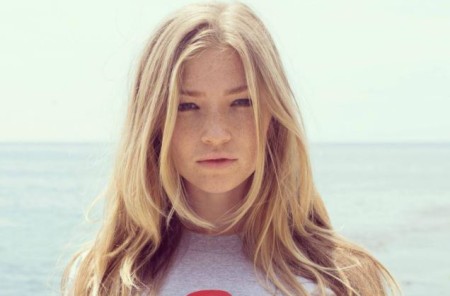 Amazon Studio's web television series, Goliath, garnered positive reviews since its premiere on October 13, 2016. The show stars Golden-Globe winning actor, Billy Bob Thornton in a lead role. And today we are going to talk about Diana Hopper who plays Thornton's daughter on the series.

The 27-year-old lovely actress is in a romantic relationship with Australian actor, Alex Russell. The two have been dating since 2015 after first meeting on the sets. Diana's boyfriend Alex is best known for appearing in films Chronicle and Believe Me. He has been playing the role of Jim Street in the crime action-drama reboot S.W.A.T since 2017.

Hopper and Russell are yet to be married, and they also don't have any kids. As per an article published in etonline on October 19, 2017, Alex and Diana who were working far apart reunited for a wedding. However, the article didn't specify if the wedding was theirs.

Meanwhile, Alex never misses any chance to show his love for Hopper. On March 6, 2019, he shared a sweet picture of himself getting a kiss from his girlfriend. Also, he added a caption: "Luckiest Man Alive." Further, they have been together for over five years as of now.

It is amazing to know that Hopper who grew up mostly in the same environment has now travelled lots of places. She has been to several U.S states and a number of European countries like England and France.

When she is not working, Hopper spends time enjoying nature. She likes sitting in a park near her home and reading romantic books. Also watching movies till late night is one of her favourites things to do. Her favourite actors are Richard Gere and Emma Watson.

Who is Diana's Boyfriend, Alex Russell?

The 32-year-old, Alex Russell is an Australian actor. He was born in Brisbane, Australia and he attended the National Institute of Dramatic Art (NIDA) in Sydney.

Alex's movie debut was the 2010 film, Wasted on the Young. Besides, he has directed a short film titled Love and Dating in LA!. Since 2017, he has been playing officer Jim Street in S.W.A.T. He appears alongside actors like Shemar Moore, Lina Esco among others.

There is no exact information available about Diana Hopper's net worth. However, she might have an estimated net worth of around $400,000 as of 2020. Diana's most memorable work is in Goliath, where she appears alongside Billy and Tania Raymonde.

Besides acting, Hopper has also co-produced a few short films such as Come Correct and Picture Wheel. She once revealed in an interview that in the future, she would write screenplays. For starring in a tv series, the 1.63m tall actress earns over $23,431 per episode.

Although Diana doesn't have a huge net worth, she is active in social works. She and her boyfriend, Alex recently launched a GoFundMe account for the Kenya Food Relief Fund.

Diana Hopper was born on February 25, 1993, in Memphis, Tennessee, USA. Her mother is a nurse at a local hospital, while her father works as a car mechanic. At 11 Hopper was cast as Gracie Shinn in a community theatre production of The Music Man. Due to the same surname, Diana is often mistaken as actor Denise Hopper's daughter.

Talking about her education, Diana hasn't attended college. However, she participated at the New York Film Academy's 4-week acting program. Besides acting, she knows to sing and play the guitar.