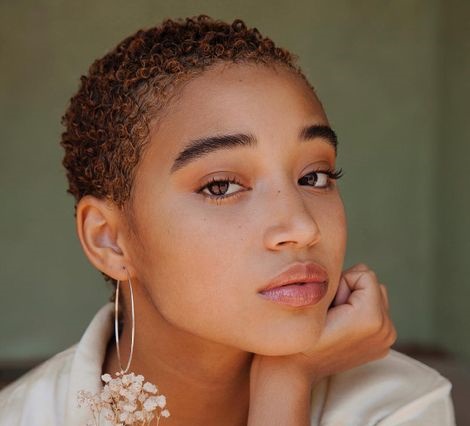 Who is Amandla Stenberg?

Have you ever watched 2012's American dystopian science fiction adventure film The Hunger Games? Then you must be near with name Amandla Stenberg who portrayed the role of Rue. Well, she is an American actress and singer-songwriter who is also famous for Madeline Whittier in Everything, Everything (2017), and Starr Carter in The Hate U Give (2018).

Aside from acting, she has considers herself as an intersectional feminist to speak out political problems such as race and cultural appropriation.

Amandla Stenberg was born on 23 October 1998 to the parents Karen Brailsford (mother) and Tom Stenberg (father) in Los Angeles, California. Her father is an African-American spiritual counselor and writer whereas her mother is a Danish. She has two half older sisters from her father's side. Stenberg holds American citizenship and belongs to African-American ethnicity. Currently, she is attending film school at New York University.

When she was only four, Stenberg started her career, serving as a model for Disney and commercial advertisements such as Boeing. She appeared in the film  Colombiana portraying Zoe Saldana's younger version. Moreover, she came in fame when she played as Rue in the film The Hunger Games in 2012.

Moreover, Stenberg's notable films are The World is Watching: Making The Hunger Games, Everything, Everything, The Hate U Give, among others. In addition, she has appeared in many TV shows including A Taste of Romance, Sleepy Hollow, Mr. Robinson, Drunk History.

Asides acting, Amandla is a musician where she played the violin and harmonies at Los Angeles venues alongside the singer, Zander Hawley. Also, she gave her voice as Bia in an animated film Rio 2 in 2012.

As an author, Amandla even wrote the comic book Niobe: She is Life with Sebastian Jones, which was published on November 2015. Further, the two released Niobe: She is Death in May 2017, the second part of the trilogy.

Does Amandla Stenberg have a Boyfriend or Girlfriend?

Well, many of her fans curious to know about this beautiful actress current relationship with the question. Is she dating someone special? Yes, the wait is finally over.

The TV star who is a gay is in a romantic relationship with her girlfriend King Princess whose real name is Mikaela Straus. She is a singer, songwriter and as well as pop star in America. King even plays many instruments like guitar, piano, drums and also released her first single titled 1950 in 2018.

Back in June, Stenberg revealed that  through Wonderland Opens a New Window magazine how they first met.

“It was a classic Malibu function; a drunken crowd by a heated pool,”

The Hunger Games actress and her girlfriend Princess were spotted on the red carpet near Radio City Music Hall during Monday night's star-studded award show.

Wearing a floral blouse and skirt from Prada, the actress didn't walk together with her on the red carpet.  But as they left their hotel space Monday night to arrive at the star-studded bash, they were spotted holding hands.

On July 2018, they confirmed their relationship before heading into the award show one month. Currently, the two blooming their love life happily.

Once there was a rumor about a teen actor, Jaden Smith, dating to Amandla Stenberg in 2015. They were partners with the festival. But their affair's rumor finished when for a long time they were not seen together. Besides, Jaden has also dated famous actress Stella Hudgens.

Back in June, she came out as gay in a new interview for Wonderland. She said:

"I was so overcome with this profound sense of relief when I realized that I'm gay—not bi, not pan, but gay—with a romantic love for women, "All of the things that felt so internally contrary to my truest self were rectified as I unraveled a long web of denial and self-deprivation."

Going through her Instagram post, she even posted a picture kissing of girlfriend on 12 October 2018 wishing Happy nationalcomingoutday.

The Everything, Everything star also said in the same interview:

Yep, I’m gay. Where do I start? I’m grateful how being gay has afforded me this ability to experience and understand love and sex, and therefore life, in an expansive and infinite way.

What is Amandla Stenberg's Net Worth? Salary, Earnings, Income

One of the fast-rising stars Amandla Stenberg who is taking Hollywood by storm. Likewise, she started earning from the very young age with the early participation in the entertainment industry. No wonder her earnings have risen now, and it is estimated that the net worth of Amandla Stenberg is around $1 million.

Besides, Stenberg also makes additional income from modeling and endorsements as she featured on the cover of Teen Vogue America.As an author, she made  a good amount from her comic books, Niobe: She Is Life priced $19.99. Hence, she fully enjoys her fortune and lives with her family a classy and luxurious life.

In addition, she became No Kid Hungry's ambassador.The Ubuntu Education Fund is also supported by her. Moreover, she was mentioned by Teen Vogue in the 30th most influential teens in 2015. The following year, Ms. Foundation for Women listed her as Feminist of the Year for her powerful political opinions on social media and interviews.

Stenberg celebrates her birthday on 23rd of October, which make 20 her 19 years old. With upcoming birthday this year, Amandla's age will be 21 years old.