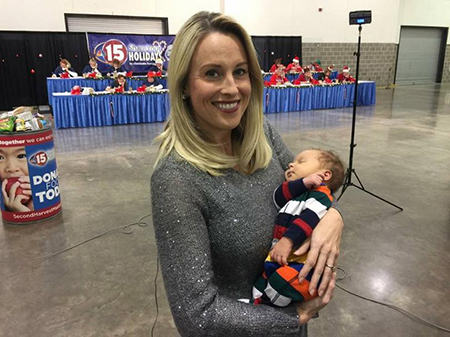 Juggling between personal and professional life is not an easy job at all. But Leigh Mills manages to do so. Along with a hardworking evening news anchor of WMTV-NBC 15, she is also a loving wife and caring mother.

Mills was born in December in the United States. By ethnicity, she is White and is an American.

Leight Mills is currently married to her boyfriend turned husband Sam Sorenson in 2012 in a private ceremony attended by families and friends.

For the day, the bride opted for a white gown with lace detail straps. Meanwhile, the groom went for black pants, a black coat, and a white shirt.

The lovebirds are together for years and are still sharing a great bond. Mills even posts several pictures of her with her spouse on social media.

News anchor, Mills is a biological mother of two children, two boys. One of them is 5, and the other is 3 as of 2019. Along with the boys, she is also a step-mother of a daughter, Maddie Sorenson, and a son, Ethan Sorenson. Similarly, Maddie and Ethan are from Sam's previous relationship.

The whole family of 6 spends most of the time together. Moreover, the anchor keeps on posting several photos with the whole family, and they seem like they are happy together.

The anchor's spouse, Sam, was first married to a lady named Sarah. The couple shares two kids who are very close to Mills.

But the relationship between them did not last long and divorced soon. Despite the separation, both of the parents are very close to their kids.

After the divorce, Sarah went to date John Misasi. They are still together and are sharing a great bond. Similarly, Sam went to start a conjugal life with Mills.

Net Worth In Thousand

Leigh Mills has a net worth of around $500 Thousand to $800 Thousand, which is similar to other journalists, Kristen Rodgers and Morgan Wolfe. She makes money from her career as a journalist.

A NBC news anchor further makes an average salary of $68,650. Similarly, she also makes bucks from her partnership with Studio 88.

Apart from all these, the family of six shifted to their new house in March 2019. Their house has a separate movie theater.

Career As An Anchor

Leigh Mills joined WOUB-TV as a reporter in 1999. The same year, she also joined Ohio University for BSJ in Broadcast Journalism. While working on the network, she anchored newscast of 6:30 PM and also reported the daily news.

Mills, moreover, joined WMTV-NBC15 in 2003 and served there till 2007. At first, she started as a general assignment reporter for 11 months. She then became weekend anchor, 5 pm anchor, and lastly 5 pm/10 pm news anchor.

Since March 2012, the journalist began her job as a managing partner of Studio 88. Likewise, she is also working on WMTV-NBC 15 as an evening news anchor since July 2007. On NBC, she even updates the social media fansite throughout the day.