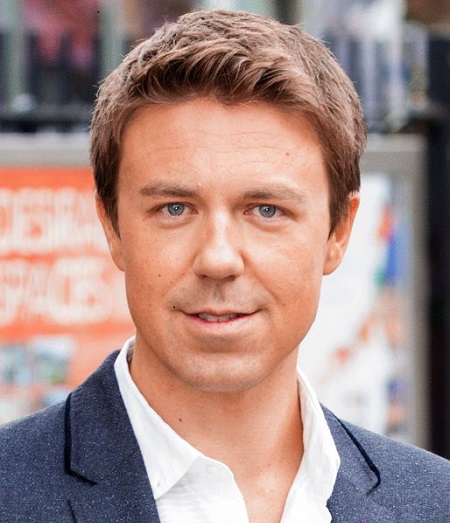 Andrew Buchan is a British stage and television actor who is widely popular for his role as Mark Latimer in ITV's serial crime drama TV series, Broadchurch (2013–17). More to that, he is also known for his roles including John Mercer in The Fixer (2008–09), Scott Foster in Party Animals (2007), William Garrow in Garrow's Law (2009–11).

He was born on February 19, 1979, in Stockport, United Kingdom but raised in Lostock in Bolton. Sadly, his mother left the world in 2000. His father used to work at Manchester airport as ahead of customs. So far, he graduated from St Cuthbert's Society, Durham University with a Bachelor of Arts degree in Modern Languages in 2001. He holds British citizenship and is of white ethnicity.

Yes, the handsome actor Buchan who studied acting at the Royal Academy of Dramatic Art (RADA) is a happily married man. He tied the knot with her long term girlfriend turned wife, Amy Nuttall, the London based actress, and singer. She is known for her roles as Ethel Parks in ITV drama Downton Abbey.

The lovebirds, Andrew, 41, and Amy, 38, got hitched on 8 September 2012 in a Hush Hush wedding ceremony. Their big day took place at Holy Trinity Church, Hoghton, Lancashire. But sadly, their pictures of their marriage have not shared until now at any platform.

As per actress' Nuttall statement they had engaged during their June holiday. Further, the duo started dating back in 2007. It means, they have enjoyed their love romance for five years before making it official.

Before Andrew, the actress who played Chloe Atkinson in the ITV soap opera Emmerdale had dated Ben Freeman for four years. They shared the screen in the series, Emmerdale.

Andrew and Amy Welcomes One Baby

Yes, the couple who are married for seven years is blessed with a child. After over two years, they announced that they were expecting their first baby together in January 2015. That same year, they welcomed their infant whose identity remains unknown to the media as they prefer to keep their private lives hidden.

The Honourable Woman's star initially gushed about Amy's pregnancy in an interview with the Sunday Times saying that his wife is pregnant and he's very excited. Also, he admitted that he had been waiting to have a baby for a long time. "I feel like I’m kind of overdue on the dad thing. He added, "I’ve felt ready for a couple of years".

What is Andrew Buchan's Net Worth?

Working in the entertainment industry for 15 years, Andrew has earned enough fortune and popularity as a hardworking actor. His net worth is estimated to be around $2 Million. He has accumulated his total wealth from his career as an actor in a TV movie.

Till now, Buchan ha performed in many TV shows like The ABC Murders, The Great Fire, Broadchurch, The Sinking of the Laconia, The Fixer, Party Animals and among others. His latest TV show is Alex Rider where he shared the screen with stars such as Vicky McClure, Marli Siu, Brenock O'Connor, etc. Thus, for his roles, his salary might fall in around $45000 in a year.

Similarly, he has performed on stage production as Mercutio in Romeo and Juliet in the Royal Exchange Theatre, Manchester in 2005. He played at The Donmar in 2008, in Arthur Miller's The Man Who Had All The Luck.