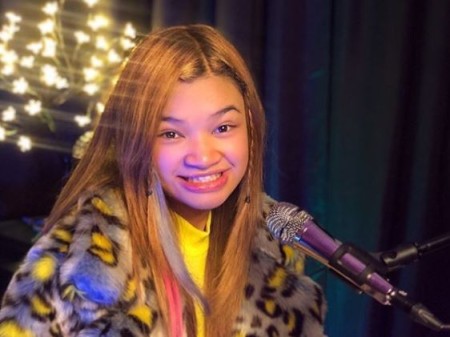 Angelica Hale is an American child singer who is best known for participating in the 12th season of America's Got Talent. She became the runner-up after she lost to child ventriloquist, Darci Lynne. Hale is a kidney transplant survivor and was the first contestant to receive two golden buzzers.

The Filipino-American child pop singer, Angelica was born on July 31, 2007, in Atlanta, Georgia, the United States. She is 13 years old as of 2020. Her parents are James Hale and Eva Bolando. Further, Hale has a younger sister named, Abigail Hale born on August 29, 2017.

Angelica nearly died due to a Bacterial Infection

When she was only four years old, Angelica suffered bacterial pneumonia that caused multiple organ failure, including her kidneys. The infection left a permanent scar on her right lung. She was hospitalized and bedridden for months in a medically-induced coma.

After a year and a half on dialysis, Hale's mom, Eva, donated a kidney and saved her daughter's life. After the successful transplant surgery, Angelica began taking singing lessons in Georgia.

Angelica's first singing competition was at the Duluth Festival Center. She ended up winning in her age group, which became the foundation of her singing career.

Rise to Fame with AGT

Hale competed on the twelfth season of America's Got Talent in 2017 and made it past the auditions singing Andra Day's Rise Up. Angelica received her first golden buzzer by guest judge, Chris Hardwick after she covered Alicia Keys' Girl on Fire.

After advancing to the next round, Angelica sang Clarity by Zedd and Foxes at the quarterfinals. Further, she sang David Guetta's Without You at the semifinals. At the Top 10 finals, Hale opened the show with a stunning performance singing Clean Bandit's Symphony. Afterward, both the audiences and judges gave her a standing ovation.

Judge Howie Mandel described her performance as worthy of a finale: "What a way to open this show! This is the finale, and that felt like that was the finale! That was the way to close the show, let alone open it." Similarly, judge Simon Cowell said: "This is the moment your career started! Angelica, you have my absolute respect."

The singer then sang Stronger (What Doesn't Kill You) by Kelly Clarkson with the artist herself and fellow contestant Kechi. Audience votes placed her in the top 5. Hale finished the competition becoming the youngest runner-up in the show's history.

Moreover, Angelica was a finalist on America's Got Talent: The Champions. She performed Rachel Platten's Fight Song and received a golden buzzer from judge Howie.

After AGT, Angelica performed in New York for a crowd of 7,000 people. She also became the first kid ambassador of the National Kidney Foundation, ambassador of the Sepsis Alliance, and celebrity advocate for Children's Miracle Network Hospitals.

In 2017, Hale was a featured performer in the 91st Macy's Thanksgiving Day parade. She frequently performs anthems and halftime-shows at events for MLB, NFL, NHL, and NBA. Apart from being a singer, Angelica is also an actress, voice-over artist, and member of the SAG-AFTRA guild.

There is no doubt that Angelica will be a successful singer. She wants to follow in the footsteps of female artists like Whitney Houston, Alicia Keys, and Ariana Grande.

There is no exact information about Angelica's net worth and earnings. She is just embarking on her professional career. As per some sources, Hale might have an estimated net worth of over $200,000.

Hale has already released her three extended plays albums, Christmas Wonders, Feel The Magic, and What's It Like. She might receive a decent earning from Spotify, Amazon Music, Apple Music, and Google Play.

Angelica appeared in the 2016 short film Medieval Sockocalpyse. In 2018, she made her feature film debut in American Reject alongside Billy Ray Cyrus, Keala Settle, and Rebecca Black.