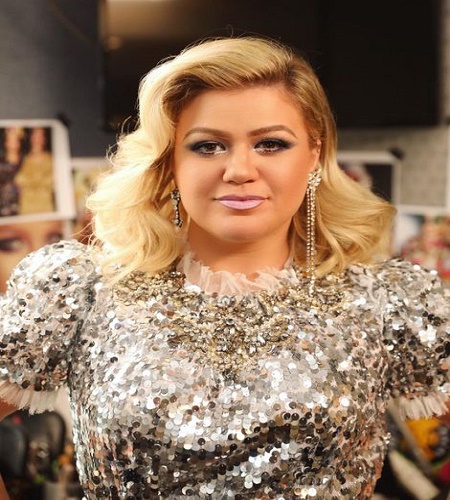 An American Idol winner, Kelly Clarkson is an American singer, songwriter, actress, and television personality as well as. Currently, she hosts The Kelly Clarkson Show's variety talk show and works as a coach on the competition series, The Voice. Some of her top 10 hits recordings are Breakaway, Because of You and Behind These Hazel Eyes.

Singer Kelly Brianne Clarkson was born on April 24, 1982, in Fort Worth, Texas to the Stephen Michael Clarkson (father) and Jeanne Clarkson (mother). Her siblings named are Alyssa Clarkson ( sister) and  Jason Clarkson (brother). She holds American citizenship and is of white ethnicity.

37, Clarkson who graduated from Burleson High School in 2000 finally marries a manager, Brandon Blackstock on October 20, 2013. The big event was held in Walland, Tennessee at Blackberry Farm.

The television personality even announced her wedding news through Twitter, claiming that she officially Mrs. Blackstock and they got married yesterday at Blackberry Farms in TN, the most beautiful place ever.

At the wedding, the gorgeous bride wore Temperly white London gown with tiny buttons and a v-neckline whereas the groom tunned in black suits pants. Since then, they're making their relationship stronger day by day. Recently, this romantic duo celebrated their 6th year wedding anniversary in 2019.

Before tying the knot, they happily announced their engagement on 14th December 2012 after 10 months of dating. Being a romantic man, Brandon even proposed his sweetheart, Kelly with a yellow canary diamond ring from Johnathon Arndt.

The host of Kelly Clarkson's show had her first interaction on Blackstock in 2006. In fact, for the first time, Kelly's manager Narvel Blackstock introduced her to his son Brandon but Brandon still marries his ex-wife.

In 2012, the current judge of The Voice claimed about their first met with Daily Mail,

I've known him [Brandon] for six years, but he was married for most of that time,"then, suddenly, there he was at the Super Bowl and he was single…"

And later on father-in-law, Narvel reintroduced them after his son's divorce, while Kelly was performing the National Anthem (NBD). In 2012 they finally kicked off their relationship in one step forward and began dating at Super Bowl XLVI.

Who are Kelly Clarkson's Children?

Born as Kelly Brianne Clarkson is the mother of her two biological babies. Together with Brandon, she first gave birth to a daughter River Rose Blackstock on 12th June 2014 (age 5 years).

Kelly's partner Brandon has once wedded his former wife, Melissa Ashworth for about 12 years. The exes tied the marriage knot in the year 2001 among their friends and family. Unfortunately, Blackstock, and Ashworth announced their divorce in 2012 but the reason behind their divorce remains private.

Together, the former lovebirds share two cute kids from their marriage. Savannah Blackstock is the first-born baby girl who was born on June 7, 2002, while on November 21, 2006, a second-one son Seth Blackstock welcomed.

Even after the division, Blackstock now takes guardianship of two kids along with his current wife, Kelly. Similarly the stepmother, Clarkson now shares a great bonding with her stepkids Savannah, 17 and Seth, 13.

The Stronger singer once said On-Air on Ryan Seacrest Tuesday  “We all live together and everything. It’s so different, but it’s perfect. They’re awesome, and I actually really dig the mom thing,”. She even officially earned the title of "stepmother" at their home in Nashville in late October when she exchanges vow with Blackstock.

Kelly Clarkson is an American singer, songwriter and reality TV star who reportedly relishes $45 million net worth with a salary of $13 million as of 2020. She further makes $560,000 per episode for being a judge on the Voice. That works to roughly $14 million per season.

Till date, Clarkson has earned just under $100 million throughout her entire career. Similarly, born in Fort Worth, TX, Clarkson rose to fame after winning the first season of American Idol in 2002 at the age of 20.  At the American Idol, she performed her winner's song A Moment Like This which became the country's best-selling single of 2002.

In addition, Three Grammy Awards winners have also sold more than 25 million albums worldwide and 40 million singles. She's had 27 singles on the Billboard Hot 100 chart, with 3 songs number one and 11 in the top 10.

On the other hand, her spouse Brandon Blackstock maintains an impressive amount of worth $5 Million with the annual earning $116,000 as of early 2020. His income mostly comes from his work as a professional manager. Also, Kelly's father in law Narvel Blackstock has $60 million wealth throughout his many musical occupations and by his company, Starstruck Entertainment.

In October 2016 in conjunction with HarperCollins, Clark published her first children's book, River Rose and The Magical Lullaby. Till now, she has authored various books including River Rose and the Magical Christmas(2017), Because of You Sheet Music(2005), Kelly Clarkson - Piece by Piece (2015) and among others.

In July 2018,  Clarkson joined the cast of the animated UglyDolls (2019) alongside Nick Jonas, Blake Shelton, and Janelle Monae.

Along with this, she also published on March 27, 2019, a new single from the UglyDolls "Broken & Beautiful": Original Motion Picture Soundtrack.

Before this home, American Idol has listed her Tennessee home for $8.75 million. She reportedly paid $3 million for Henderson's 20,000 square foot, 2012 Tennessee house. This property consists of 7 bedrooms and 4 acres, situated on a lake.  Similarly, she had also previously rented an LA home.