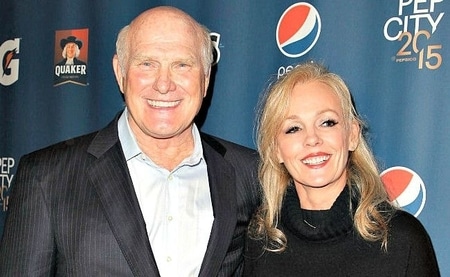 After three failed marriages, Terry Bradshaw is hoping for a successful relationship fourth time. He tied the knot with Tammy Bradshaw, and so far, the bond between the couple is going strong.

The co-host of Fox NFL Sunday is a retired footballer, but his love for the game won't leave him. Terry's fans are fortunate that he found solace in his wife. Many know he has a robust personal life and wants to know more. If you're among them, then read along.

Fifteen Years of Dating before the Marriage

Terry first met Tammy in 1999 after divorcing his third wife, Charlotte Hopkins. After the separation, the retired footballer faced difficulties and was diagnosed with clinical depression.

Since he met Tammy, her love and caring nature has helped Bradshaw to take his mind off his failed relationship. The couple gradually started dating each other, and finally, on July 8, 2014, they exchanged wedding vows with each other.

The pair rang wedding bells in a private ceremony in front of their loved ones. As of now, the duo is celebrating their two decades of lasting romance. Terry and Tammy have the comfort of raising children, but they do not share any kids.

Tammy is a Supportive Stepmother

Even though the couple do not share any children of their own, they are, however, parents to kids from their previous relationship. Tammy tied the knot with David Luttrull in 1983 before marrying Terry.

The marital relationship did not last very long as the duo parted ways in 1998. They also never shared any offsprings. But after meeting with Terry, she received the privilege to be a mother of Terry's two children.

From his third marriage with Charlotte, the Fox Sports host became a father to two daughters. Rachel Bradshaw and Erin Bradshaw, both are now fully grown adults and are well-settled in life. Rachel tied the knot with Rob Bironas on June 28, 2014, and lived together with her husband until he passed away on September 20, 2014, because of the car accident. She is now dating Austin Pennington.

On the other hand, his second daughter, Erin, walked down the aisle with AQHA exhibitor Scott Weiss on May 6, 2017. Both parents are very supportive of their children. They often support AQHA as part of their philanthropy works.

The former NFL player tied the wedding knot with then Miss Teenage America 1969, Melissa Babish. The couple stayed together for almost eighteen months before parting their ways in 1973.

After the short-lived marriage with Melissa, Terry took his time to find love again. He moved on with figure-skating star JoJo Starbuck in 1976. The couple tied the knot the same year, but this romantic affair also failed after a short period. Bradshaw and Starbuck parted ways in 1983 after seven years of marriage.

Bradshaw moved on and found love again in Charlotte Hopkins. They walked down the aisle in 1983 before filing for divorce in 1999. After three failed marital relationship, Terry went on clinical depression. He suffered from anxiety attacks and found it difficult to bounce back.

Fox Sports and His Generous Heart

After retiring from the NFL, he took some time off. He spends his time with his partner Tammy and gradually started to bounce back. With the love and support from his wife, Terry is now in a happy place in his life.

He is currently the co-host of the Fox NFL Sunday. Fox Sports is a home of some fantastic sportscaster. Terry now has added his name to the list of most iconic sports analysts.

Besides his professional success, Bradshaw is also known for his philanthropic work. He earned the net worth of $15 million, and with that, he often donates to charities and foundation. Together with him, Tammy also shows her generous spirit and participates in a good deed.

For further updates on NFL players and Coaches, stay tuned to Married Celeb.