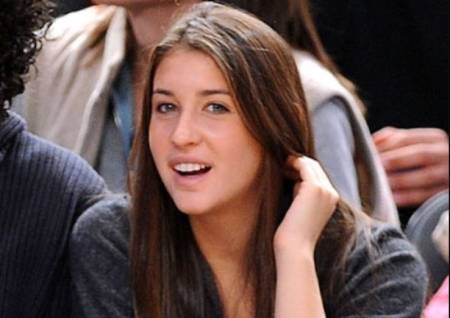 Ashley Jade Stern is the youngest daughter of an actress, Alison Stern and Howard Stern, an American radio personality who's widely known for his long-curly, shoulder-length rock-star hair and towering height and slender frame. Her father is also best known as the producer of his comedy talk-show, Howard Stern on Demand.

Stern was born on 24th January 1993 in the United States of America and hails from Polish-Austrian-Hungarian heritage. She grew up with her two older sisters, Emily Stern (born on 7th May 1983) and Debra Jennifer Stern (born on 9th May 1986). For more details about Stern's personal life, read the article to the end.

The 27-year-old, Ashley is reportedly living a single life, but people are curious to know about her love interest. Nevertheless, she isn't much familiar with disclosing her personal details and maintains a low profile living.

But as per some online sources, Stern is dating a guy whose identity is not revealed. During the wedding of her sister Debra's, Ashley arrived with her unnamed boyfriend. As Ashley has not confirmed any thing regarding her dating life, it is hard to claim any details about her boyfriend.

Stern is currently concentrating on her regular work and busy schedules so that she can achieve her life goals as much earlier as she can. It also seems like she is following her parent's footsteps to debut in the entertainment industry.

Ashley's parents, Howard Stern and Alison Berns Stern were married on 4th June 1978 at Temple Ohabie Shalom in Brookline, Massachusetts. During the time of marriage, the pair were 24 years old. Before their wedding, Howard said,

"Within a week after our relationship began, I knew I was going to marry her."

The couple had their first encounter while studying at Boston University and became friends after a mutual friend introduced them. Shortly after their first interaction, they began dating and got engaged afterward.

All the things were good in their marital relationship, but something just happened that changed the way of their life and separated after staying married for 23 years. During an interview with the media, Howard told the reason of their separation, he stated,

"I was totally neurotic and sort of consumed with work. I took work as the most important thing and the only thing".

The couple later filed for divorce in October 1999 and finalized their divorce amicably in 2001. In the divorce settlement, it was written that Howard and Alison have to take the custody of their three daughters in a specific manner.

The bridegroom invited over 180 wedding guests, including Chevy Chase, Jimmy Kimmel, and Donald Trump, among others. During their reception, Phoebe Snow sang the wedding song, You Send Me, and Billy Joel performed with the cover of The Stranger. Chevy and Patrick Monahan also put some glance at their marriage.

The pair first met in the early-2000s and started dating afterward. Seven years later, the duo announced that they're planning for their wedding and got engaged on 14th February 2007. Since then, the rest is history.

Her Father, (Howard)'s Other Dating History

Ashley Jade's dad, Howard first dated a woman, Irene, who's from Far Rockaway, Queens, New York City, NY in 1967. The duo, however, split up due to some reasons after one year in 1968.

Howard was later involved in a romantic relationship with a model, Robin Givens in 1999. In the same year, he was also dating secretly with an actress, Angie Everhart. Unfortunately, both of his affairs didn't last long after they found themselves cheated over Howard in 2000.

Stern previously had an encounter with Ann Whitehead, who's the author of The Frazzles in 1973. He was also rumored to be dating Kylie Bax and Amy Lynn Baxter in between 1999 and 2000.

Ashley Jade Stern's dad, Howard's has a net worth of $650 Million as of 2020. He earns an annual income of $15 Million per episode as a judge on NBC's reality talent-hunt show, America's Got Talent.

Howard currently serves as a radio host for radio broadcasting company, Sirius XM Satellite Radio since 2011, where he earned $80 Million from his previous five-year contract. Back in 2017 and 2018, he persistently made a total earnings of $90 Million.

Ashley Jade Stern lives in her father's luxurious rooftops located in Manhattan's Millennium Tower in New York City, New York, which Howard bought at $11.25 Million in 1998. Currently, the price of his 2,546-square-feet accommodations is listed $15.1 Million in 2008.

Jade Stern's father bought a house in Long Island, Southampton, New York for $20 Million in 2005. The home consists of 5 master bedrooms with 4 full and 1 half flourished bathrooms and a fully designated swimming pool.

Howard's dad recently bought a house in Palm Beach, Florida for $52 Million in 2018. Their home features 12 bedrooms, 11 and half bathrooms on 14,157 square feet. Just like him, Hank Kuehne also lives in the same location where Stern's family resides.

If You want to Read more Biographies and Gossips on Celebrity Children, Then Visit Married Celeb !!!