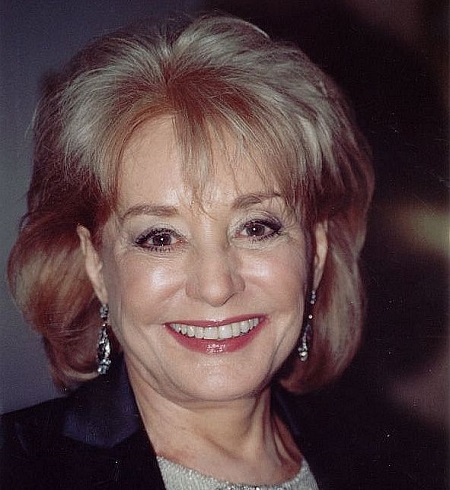 Barbara Jill Walters was born on September 25, 1929, in Boston, Massachusetts, the U.S. Her parents are Lou Walters (died on 15 August 1977), a British booking agent, and Dena Seletsky. Further, she had one older sister, Jacqueline, who died in 1985 from ovarian cancer and one brother Burton Walters died in 1932 due to pneumonia. So, she holds American citizenship and is of Russian American ethnicity.

Tied The Knot Four Times, Know About Her Husbands

They got hitched on June 20, 1955, in a private ceremony at New York's The Plaza Hotel. But after 11 months, their marriage was reportedly annulled in 1957. Then she went to marry a theatrical producer and theater owner, Lee Guber.

Barbara and Guber tied the knot on December 8, 1963, and had divorced in 1976. During their marital relation, they adopted a daughter Jacqueline Dena Guber, born on 14 June 1968, a few days after her birth. Well, Jacqueline was named after Walters' older sister's death who was born mildly mentally retarded.

Her third marriage was with the CEO of Lorimar Television, Merv Adelson. After the first meeting after a mutual friend arranged a blind date in 1985, they first married in 1981 but later they ended their matrimony in 1984. Two years later, the duo remarried for the second time in 1986. But again they parted their ways in 1992.

Her Other Past Love Affairs

American journalist, Barbara, aged 90, had a love affair with a lawyer, Rory Chhn in their college time. Chhn claimed that he proposed her the night before her marriage to Lee in 1981. But she denied this.

Also, she was romantically linked with the Federal Reserve of the United States, Alan Greenspan in the mid-1970s. Further, she dated the Secretary of the Navy of the US, John Warner in the 1990s.

As per her autobiography Audition, Walters also encountered with late Republican politician, Edward Brooke in the 1970s. Added to that, she dated Robert N. Butler, the Pulitzer Prize-winning gerontologist in 2007.

How much is Barbara Walters worth?

Working in the news industry for nearly 60 years, Barbara has earned a huge fortune. As of early 2020, she has a staggering net worth of $170 million. She credits her worth to her work as a broadcast journalist and television personality.

For her salary, Walters earned $1 million a year as the first anchorperson during her work at ABC. In addition, Forbes Magazine calculated her wages at $12 million per annum in 2007.

Her career highlights include The Today Show, ABC Evening News, 20/20, and The View. Likewise, her interview with TV personality, Monica Lewinsky is known as the highest-rated news program throughout her life.