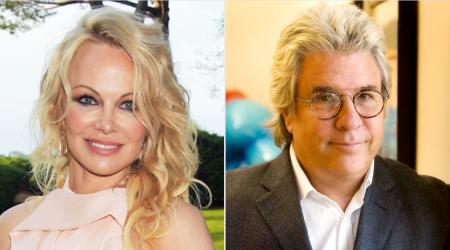 Canadian-American actress, Pamela Anderson tied the knot for the fifth time with a Hollywood director, Jon Peters on Monday in a private ceremony held in Malibu, California.

The beautiful pair are familiar since their first meeting in the Playboy Mansion when Anderson just settled down to Los Angeles from British Columbia in the mid-1980s. After having a sweet conversation, Peters supported Anderson with funding acting, dance and voice-over lessons to uplift her career.

After dating for many years, Peters proposed her, but Anderson wasn't impressed with him. When he proposed her for marriage, but the proposal didn't succeed due to their 22-years age gap when Anderson was just 22 and Jon was running at the double to her age.

But, Jon guaranteed that their age difference wouldn't be a problem to their relationship after 30 years. Fortunately, his words were right after they eventually met in 2019 and united as soulmates for a lifetime. Just like, Devanne Villarreal and her husband, Davante Adams, who are also a childhood sweethearts.

As per The Hollywood Reporter, Pamela's 5th husband, Jon provided some statement about her career and how they found love, where he stated,

“Pamela has never seen her full potential as an artist. She has yet to shine in a real way. There is much more to her than meets the eye, or I wouldn’t love her so much,”

“There are beautiful girls everywhere. I could have my pick, but -- for 35 years -- I’ve only wanted Pamela. She makes me wild -- in a good way. She inspires me. I protect her and treat her the way she deserves to be treated.”

Following this, Anderson also gave an introduction of her relationship with Peters through a romantic poem, where she told,

“Jon is the original ‘bad boy’ of Hollywood –
no one compares –
I love him deeply like family.
His life used to scare me.
So much for a girl like me.
Now I’ve seen more of life
and realize ..
He’s been there all along.
Never failed me –
I’m ready now
and
he’s ready too –
We
understand
and respect each other –
We love each other
without conditions. –
I’m a lucky woman. –
Proof
God has a plan”

Before Pamela's wedding with Peters, she was married to Tommy Lee, the drummer of Motley Crue on 19th February 1995. Unfortunately, they divorced after Lee was charged with domestic abuse upon Anderson in the Los Angeles County Jail in 1998.

After the separation, Pamela took the custody of their two children, Brandon Thomas (born 5th June 1996) and Dylan Jagger (born on 29th December 1997). Later, her older son, Brandon said about her fifth marriage with Jon,

‘I’m incredibly happy for my mum and Jon. They’ve known each other for over 35 years and I wish them luck in this next chapter of their lives together. I will support the happy couple however I can and I’m excited to get to know Jon’s family even better.”

Pamela then got engaged to a model, Marcus Schenkenberg shortly the 1998 divorce, but their engagement called off due to some reasons. Following that, she got engaged with a singer, Kid Rock aka Robert J. Ritchie in 2003 and exchanged their wedding vows in 2006. In the same year, they split up, citing irreconcilable differences.

Anderson then walked down the aisle with a film producer, Rick Salomon in 2007, but separated in 2008. Eventually, they patched up again in 2014 and married for the second time. Their marriage, however, didn't last this time and divorced in 2015. Pamela also dated a French soccer player, Adil Rami from 2017 to June 2019.

On the other hand, Pamela's current spouse, Peters is also married five times and was romantically involved in a relationship with Barbra Streisand. He welcomed a son, Christopher with his second wife, Lesley Ann Warren, two daughters, Caleigh and Skye with the third spouse and again a daughter, Kendyl with his fourth estranged wife.