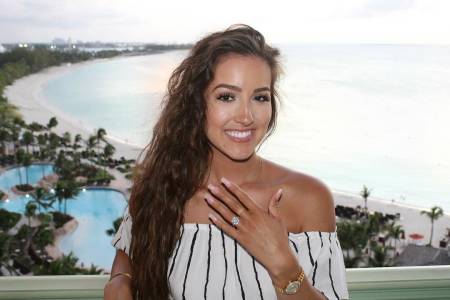 Devanne was born in the United States of America, and her birthday comes on the 15th of January every year. She grew up with her three siblings, Chris, Nate and Celeste Villarreal. Explore more about Villarreal's personal life in the following sections.

American esthetician, Villarreal and her husband, Davante Adams are keeping a joyful bond in their conjugal relationship. The two walked down the aisle on 2nd June 2018 in California.

The bridegroom was looking gorgeous at their wedding ceremony, where Devanne wore a white slash neck solid lace floor-length ball gown, designed by Sweet Caroline. Meanwhile, Davante was dressed in a simple style gentleman slim tuxedo, tying up with a black bow tie.

At the end of their nuptial, the pair performed a mesmerizing dance performance for their wedding guests. They also held a wedding reception in Santorini, an island in the Aegean Sea, Greek, and captured some jaw-dropping pictures on the side of the ocean.

Childhood Sweethearts to Getting Engaged

The married couple met for the first time at California State University, Fresno in 2011. During that time, Davante was playing as a true freshman for the Fresno State Bulldogs football team.

The two later interacted, and shortly after having a good conversation, they began dating. After dating for many years, the duo got engaged after Davante proposed Devanne on the trip of the Bahamas. Since then, they are creating history with memorable moments.

Gave Birth to a Baby Girl

The beautician, Devanne and her spouse announced that they're going to welcome a baby girl via Instagram on 4th July 2019. A few months later, Davanne gave birth to their daughter, Daija Leigh Adams on 20th September 2019.

The Villarreal and Adams' family are happy to welcome a new member in their family. Recently, Adams shared a picture holding her daughters in her arms on Instagram, captioning "Best Birthday Yet" with her lovely daughter on 15th January 2020.

How much is Devanne Villarreal's Net Worth?

Devanne Villarreal's total net value is $150 Thousand as of 2020, which is less than Promise Phan's fortune. She earns a decent income from her profession. On the other hand, a beautician in the United States earns $60,163 per year. So, Devanne's annual salary might be listed in the same range.

Similar to Villarreal, her husband maintains a lucrative net worth of $25 Million. Back in 2018, Forbes listed his name at #77 of "The World's Highest-Paid Athlete" with an earnings of $24.5 Million, including $18 Million signing bonus and $30 Million guaranteed.

More to that, Devanne also did endorsement deals with popular brands or products, Nike, Pepsi, Head & Shoulders,Associated Banc., etc. So, there are some of his career earnings with total cap hits listed in the below.

The football wide receiver, Davante is currently in a 4-year contract with the Green Bay Packers for $58 Million. He currently receives an average annual salary of $14.5 Million, which include an $18 Million signing bonus and $30 Million total guarantees.

Their former house was built in 2006, which is based on 3,000 square feet, including 1,000 square feet of garden in the south face. It also consists of a theatre room, three bedrooms, and three bathrooms.