Beth Ostrosky Stern and Her Family 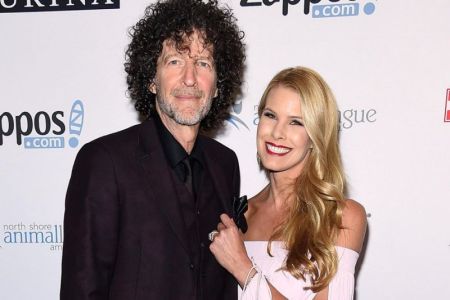 A true marital union is a leap of faith in which two persons gave their hearts, trusting each other not to break it, and no matter what comes, they will never regret to show their differences. This type of relationship can be seen with the longtime married couple, Beth Ostrosky Stern and Howard Stern.

The native of Pennsylvania, Beth mesmerized the world with her amazing acting and helped the people with her heart of gold. To explore more about Stern's personal life, take a look in the following sections.

The 47-year-old actress, Beth met her soul mate, Howard Stern in the startings of the 2000s, and shortly they began their love affair. After dating for many years, Howard proposed her on Valentine's Day in 2007 with an expensive 5.2-carat diamond ring. At that time, she got the love of her life with Stern and then happily engaged.

The love birds walked down the aisle on 3rd October 2008 at the Le Cirque restaurant located in Manhattan, NYC. Fortunately, their mutual friend and Kelly Ripa's husband, Mark Consuelos performed their grand ceremony.

At the time of their nuptial, the pair welcomed 180 wedding guests, including Chevy Chase, Jimmy Kimmel, and Donald Trump, among others. Their other friends like Phoebe Snow performed a wedding song, You Send Me, and Billy Joel sang The Strangers' cover song.

What's more to this? The marital partners spend lovely time in their spare time and maintains immense respect and understandings in their relationship. The couple recently celebrated their 11th marriage anniversary on the 3rd of October 2019.

Beth's beloved spouse, Howard was committed to his first wife, Alison Berns Stern when they were running at the age of 24. The two exchanged their wedding vows on 4th June 1978 at Temple Ohabie Shalom church in Brookline, Massachusetts. Earlier to their nuptial, the bride said,

"Within a week after our relationship began, I knew I was going to marry her."

The former couple met for the first time while studying at Boston University and then introduced by a mutual friend. They then started dating and got engaged shortly after graduating from the University.

After living in a blissful marital union for 21 years, the pair separated citing irreconcilable differences, and Howard later said that he was short of consumed and totally neurotic while working, which ended up his marriage with Alison. The two then finalized their divorce by settling their three daughters, including Ashley Jade Stern in 2001.

The Story of Beth's Life Is Beautiful!

The author of Oh My Dog, Beth was born as Elizabeth Anne Ostrosky on 15th July 1972 in Pittsburgh, Pennsylvania. She was raised in the hands of Judy Jarema, a former model, and Robert Ostrosky, a dentist who believe in the Roman Catholic faith.

The older sister of two brothers, Beth first enrolled at Fox Chapel High School. She then found her passion in modeling while attending the University of Pittsburgh and then left the school for pursuing her modeling career.

Back in July 2012, Beth lost her pet dog, Bianca, an English bulldog breed when he was at the age of 10. After the death of her beloved friend and pet dog, she decided to start her own foster home for cats and kittens in 2013. Since then, she helped thousands of pets to stay in permanent homes through adoption.