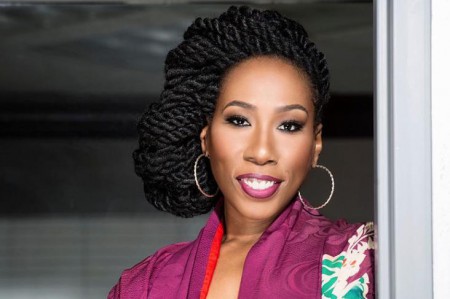 Brandi Harvey is the daughter of the famous TV host and comedian, Steve Harvey. Not to mention, she is famous as the eldest daughter of Steve. Furthermore, she was born as a twin with sister Karli Harvey.

Also, she has a stepmother Marjorie Elaine Harvey who is also equally famous as the spouse of Steve Harvey. Brandi Harvey was born on 20 August 1982, in the USA. Moreover, her mother, Marcia Harvey is the first wife of her father. The two them were in a married life from 1980 to 1994.

The 37-years-old, Harvey is a very secretive person when it comes to the topic of her personal life. To date, she has not revealed anything about her relationship status to the media, so, there is no information about whether she is married, single or in a relationship.

Moreover, there are no past records of her being in a relationship or dating. In the Contrary, her twin sister, Karli walked down the aisle with Benjamin Raymond in 2015. However, Brandi remains secretive towards her love life.

What is Brandi Harvey's Net Worth?

Brandi Harvey net worth is estimated to be in between $100,000 to $300,000 as of 2019. She collects this hefty sum of money through her career as a president of Young, Fit and Fly as well as the director of Steve and Majorie Harvey Foundation.

However, there is no information about her salary and yearly income until now. In addition, her father, Steve Harvey net worth is around $160 Million as of 2019. Not to mention, her father earned this hefty sum of money through his career as a comedian, TV host, and author.

Who is Brandi Harvey?

The celebrity child is the eldest child of Steve. She grew up alongside her five siblings, Broderick Harvey Jr, Jason, Karli, Lori Harvey, Morgan Harvey, and Wynton Harvey. Similarly, she belongs to Afro-American ethnicity and holds an American nationality.

Additionally, she graduated from Ohio State University with a Bachelor of Arts degree in 2005. However, there is no information about her high school details until now.

Rather than her professional career, she is best known for her family’s identity. However, talking about her profession, she is the president of Young, Fit and Fly from 2010. The organization is focused on empowering young women. Also, she was featured as a public speaker and a teacher on the cover of Premae Magazine.

Harvey is an attractive woman with an hourglass body figure. Not to mention, she is very conscious of her physique and regularly hit the gym to shape her body figure. Unfortunately, there is no information about her exact height, weight, and body measurements like bra size, and shoe size until now.

Moreover, her eye color is dark brown and his hair color is black. Similarly, Brandi Harvey age is 37-years-old as of 2019. She can't go unnoticed in the public carrying her looks and body figure.