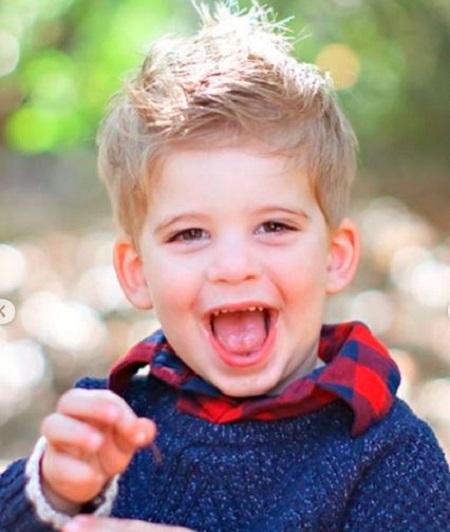 Brayden El Moussa is an American celebrity child who has gained fame since his birth. He is known as the youngest child or single son of HGTV's show Flip or Flop's stars, Christina Anstead, and Tarek El Moussa. Together, they also ran real-estate agency Tarek and Christina: The El Moussa Group in Orange County, CA. Now, Christina runs her own HGTV show named Christina on the Coast since 2018.

The celebrity kid Brayden was born on  August 17, 2015, in California, United States of America. Further, he has an older sister named Taylor El Moussa, born on 22nd September 2010 and has half younger brother Hudson London Anstead, born on September 6, 2019. His aunties are Carly Haack and Angelique. As per his citizenship, he is American and belongs to the white ethnicity.

When His Parents, (Christina and Tarek) Had Divorced?

37, Christina and 39, Tarek El were married in 2009 at a ceremony in Coronado Island, San Diego, California. From their married life, the couple is blessed with two babies named Brayden and  Taylor.

But, after marrying for around 7 years, the couple Tarek and Christina split in May 2016 privately due to unfortunate misunderstanding. But it became public in January 2017. Their divorce was finalized in January 2018 after wedded for nine years.

In fact, Flip or Flop ex stars now still share a good bonding together and have a great working relationship. Despite the rumors, El Moussa claimed that he is very happy for his ex-wife and her new partner. "I think it's a great thing, I think they get along well.

Following her divorce with Tarek, the real estate investor Christina El went to marry Love of Cars' star, Ant Anstead. But just like Christina, aged 49, Ant was previously married to his first wife, Louise Anstead, with whom he has two kids, Archie Anstead, 12, and Amelie Anstead, 15.

They married at their house in Newport Beach, California, on December 22, 2018, at an intimate ceremony. They dated only one year before walking down the aisle. 70 guests attended the event, including close friends and family.

On their wedding day, the bride donned in a white lace dress by Ines Di Santo while the groom looked dapper in a gray suit. In fact, the kids of Ant and Christina stood by as their parents said 'Ido.' They all look so good! The kids in their wedding clothes were little cuties.

Yes, it is very true. As of now, Tarek El has been sparkling his love life with American actress and model, Heather Rae Young since July 2019. They were first spotted kissing and cuddling on a yacht at the Portofino Hotel & Marina in Redondo Beach, California, on 29 July.

More interestingly, the pair became an engaged couple on July 26, 2020, after one year of love romance. Tarek popped the question his girlfriend Heather on Saturday night on a boat trip to Catalina Island, California while they were celebrating their one-year anniversary.

At the current moment, Brayden, 5, has not engaged in any kind of profession because he is too young to start his own career. Henceforth, he is surely enjoying the impressive amount of assets maintained by his parents.

When it comes to her father, Tarek Moussa's total worth, it is around $10 million. He has gained his fortune through his own career as a real estate agent and reality TV personality.

Whereas her mother, Christina Anstead has a whopping net worth of $12 million as of 2020. She has accumulated a substantial amount of fortune for herself working as a real estate investor and television personality. Similarly, her salary is estimated at $50,000 per episode of Christina on the Coast.

Further, Christina and Tarek sold their property in Santa Ana, CA for a profit of $34,000 in 2010 with their business partner Pete De Best. Also, they paid a fairly paltry $10,000 per episode in the show Flip or Flop.

If You're Fond Of Exploring Your Favorite Celebrities' Exciting Things, Then Visit Marriedceleb!!!