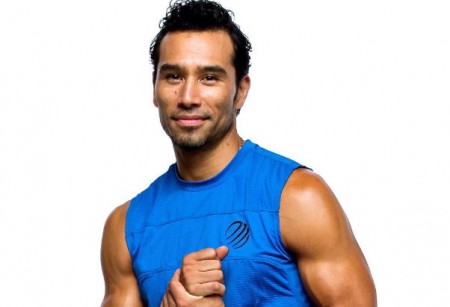 In the world full of stress and rush, people nowadays find it difficult to engage in daily physical activities. So to improve health and fitness, people hire personal fitness trainers. Among such trainers, Brett Hoebel is a renown personality who has helped many individuals to gain toned physique and improved health.

Hoebel gained recognition for appearing as a trainer on reality tv shows The Biggest Loser: Couples 4 in 2011. He also appeared on the Food Network reality TV show 'Fat Chef' in 2012.

He has diverse experience in Eastern and Western disciplines, including his martial arts training in Afro-Brazilian capoeira and Muay Thai kickboxing. Brett received an undergraduate degree as a premed in biomedical science and post-graduate studies in functional strength training nutrition, yoga, and holistic health.

Who Is Brett Hoebel's Girlfriend?

The personal trainer is in a romantic relationship with renown journalist and meteorologist, Liberte Chan. The couple began dating in early 2017 and are still together as boyfriend and girlfriend. However, Hoebel and Chan are not married yet, and they don't share any child.

Digging through Hoebel's Instagram account, it seems that Chan hired him as a personal trainer as she is quite passionate about health and fitness. The couple share videos of working out together, and they also visit many exotic places.

Although Brett is dating his girlfriend, Liberte as of now, his lover was previously married to another famous actor, Brian Chase. They dated for a long time their wedding knot in 2012. Their marriage ceremony was held at Greystone Mansion's Garden in Beverly Hills.

Chan and Chase were married for two years, but they separated, citing the reason for their divorce as a personal misunderstanding. After three years of separation, Chan began dating personal trainer Brett Hoebel.

Who Is Liberte Chan?

Liberte Chan is a meteorologist and reporter who works at KTLA 5 who began working for the station in 2003. She graduated with a degree in meteorology from Mississippi State University in 2015. Also, she has a master's degree in Public health from USC's Keck School of Medicine.

The 5-feet 5 inch tall meteorologist has a net worth of $3 million. She earns an annual salary of over $53,671. Her love for fitness and yoga brought close to building a loving relationship with Hoebel.

As per a fitness website, the average salary for a personal trainer is $54,000 per year. Besides, if the trainer has high profile clients such as media personalities, then they earn a higher income. In case of Brett, he works with celebrities so his salary must be higher than usual. Hoebel has a net worth of $900,000 as of 2019.

Brett is the founder of a fitness clothing line called Sweat with Soul. The line consists of various apparel such as t-shirts, leggings, hats, and the price range is between $25-$60.

The primary source of Hoebel's income is his fitness career. Apart from workout training, he earns extra wealth from his fitness programs such as 20 Minute Body. There are many fitness trainers who has a higher salary and net worth. For example, Paige Hathaway has a net worth of $3 million, whereas Anna Kaiser has a net worth of $1 million.

Brett cares for his clients, and he gives them intense workouts programs to improve their overall health and physique. He published a book called The 20-Minute Body: 20 Minutes, 20 Days, 20 Inches which presents a high intensity workout an eating plan that delivers big results in just 20 minutes a day.

One of his training programs is Hoebel Fitness, which is dedicated to empowering people with the knowledge, motivation, and ability for personal change.