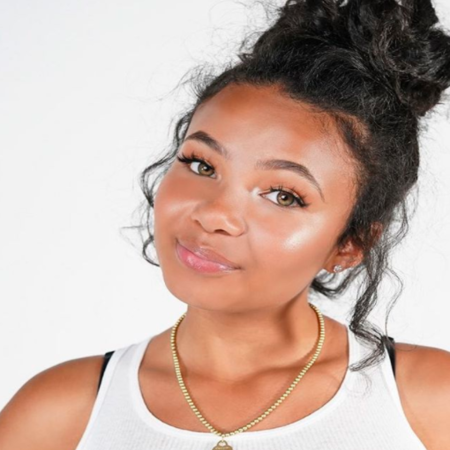 Have ever heard the 2017 Vevo music video, KeKe Taught Me? If yes, then you might be familiar with the young and talented American singer-songwriter and rapper, Brooklyn Queen. Moreover, she became a viral sensation at the age of 8 with her outstanding rap. On the other hand, she is also famous for her creative force behind songs like "Beat the Baby" and "Pretty Girl Stuff".

Brooklyn Queen was born on July 3, 2005, in Detroit, Michigan, USA. Moreover, she is the daughter of Nailnotirious Kim, a nail technician, but her father's name is unknown. Besides, we don't have information on her siblings' and educational qualification yet. She holds an American nationality and belongs to mixed ethnicity.

Moving towards personal life, Brooklyn is just 15 years old and might not be in a hurry to date someone yet. So, she is currently leading a single life with her parents and family likewise Julia Antonelli. Besides, she is focusing on her rapping career and education rather than wasting her time in relationships and rumors.

Nevertheless, Brooklyn loves to spend her free time with her friends by marking videos and going to high school. On the other hand, her parents might have set a certain rule and regulation for what is right or wrong for her. There is no doubt that she is growing up with sound health both mentally and physically. As of now, Queen is just enjoying her happy family life away from rumors and controversies.

How Much Is The Net Worth of Brooklyn Queen?

Well, Brooklyn Queen is just in her early teenage so, it is quite difficult to predict her exact net worth figure right now. However, she might have collected a decent amount of money from her career as a rapper. Besides, we can guess that her net worth might be around $500,000 which is similar to Olivia Nikkanen.

Moreover, her main source of earning is from her rap and songs. Brooklyn also has a YouTube channel @BrooklynQueen with 1.06 million subscribers. According to SocialBlade, her channel monthly earning of $794-$12.7K and yearly earnings of $9.5K-$152.4K.

Apart, she is also present on Instagram @brooklynqueen03 with the following of 1.4 million to date. So, she might earn around $2,500-$4,000 per post. As of now, she is living a healthy and wealthy life with her family and friends.

The five feet and two inches (1.58 m) tall, Brooklyn began her career at the age of five writing songs. Besides, at the age of eight, she recorded her first song. However, she rose to fame in 2017, at the age of 13 when she made her debut with the release of the rap video "Keke Taught Me".

Moreover, the video featuring comedian Eastside Ivo became a massive hit within no time and it has crossed 54 million views. Apart, she is also famous for her others single like Beat the Baby, Feeling So Wavy, Emoji, Pretty Girl Stuff, Rich Girl Problem, and many others. Besides, she also shared her daily life video and blog.  Apart, she is the biggest fan of Beyonce.