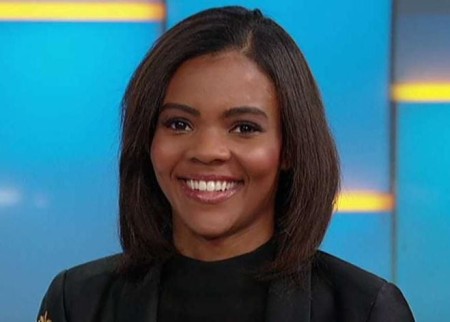 Being in politics always doesn't bring you support and wins. Sometimes, you also have to lose and face strong criticism. Likewise, Candace Owens, a conservative political activist, author, and commentator, has had her fair share of fame and struggle.

The 31-year-old Candace Owens is famous for her pro-Trump activism. Further, she was the communications director for an advocacy group, Turning Point USA.

Owens, who belongs to Carribean-American heritage, is married to an Englishman, George Farmer. They first met at a soft launch reception party for Turning Point UK in December 2019. After three weeks of the first meeting, they engaged in early 2019.

On August 31, 2019, Owens and Farmer tied their wedding knot. Their marriage ceremony took place at Trump Winery in Charlottesville, Virginia. In September 2020, the couple announced that they were expecting their first child.

Who is George Farmer?

Farmer is a former chairman of Turning Point UK. Additionally, he is an Oxford graduate and a hedge fund employee.

George's father, Michael Farmer, a British businessman, is also a member of the House of Lords.

The conservative commentator, Candace Owens, has a net worth of $1 million as per celebritynetworth. She has a long history of being in the political industry. As a political activist and author, Owens per year earnings might be over $121,216.

Owens prefers to lead a modest lifestyle despite her apparent riches. In addition to her political career, Candace is involved in political campaigns. Additionally, she hosts The Candace Owens Show on PragerU's YouTube channel.

Owens launched the Blexit movement in 2018. The motive of her social media campaign is to encourage African Americans to abandon the Democratic Party and register as Republicans. The Diamond and Silk sisters, Lynnette, and Rochelle, are also famous for supporting Donald Trump.

U.S Senate or a Governor

Candace announced her intention to run for office in the U.S. Senate or to be a governor in April 2020.

Further, she said she would run against a Democrat but not a Republican. Candace didn't reveal which office she would run for or in which election cycle.

Candace is known for her criticism of the Black Lives Matter movement. She states African-Americans have a victim mentality.

In June 2020, Owens claimed that George Soros, a Hungarian-American billionaire paid people to protest the killing of George Floyd. Later it was found that her claim was false.

Feud with Cardi B

It seems that the "Girls Like You" rapper is dissatisfied with the conservative author. Cardi B accused Owens of having an identity crisis for having a white husband. In response, Candace replied to the singer to "stop reading your DNC script."

Their feud started after Candace shared a clip of her appearance on The Ben Shapiro Show. She called Cardi B illiterate and a tool of presidential nominee Joe Biden. Afterward, their war continued on social media.

Owens claimed that she received three racist death threats while she was 17. Her family then sued the Stamford Board of Education. As a result, they got a $37,500 settlement in 2008.

Candace Owens was born on April 29, 1989, in Stamford, Connecticut, the United States. Her parents divorced when she was young. Owens and her siblings grew up with their grandparents.

The third of four children, Owens graduated from Stamford High School. With a dream of becoming a journalist, she joined the University of Rhode Island but left after her junior year.