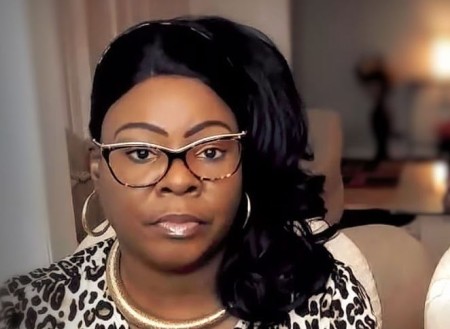 The U.S. President, Donald Trump, is not a favorite personality among African-American people. However, there are two sisters known as Diamond and Silk, who gained recognition after supporting the president on media outlets. They are none other than Lynnette Hardaway and her sister, Rochelle Richardson.

The sisters are an American live-stream video blogger, political activist, and former Fox Nation host. Previously a Democrat, Lynnette, along with Rochelle, are now registered Republicans. They have a political commentary YouTube channel called Diamond and Silk - The Viewers View.

Ineitha Lynnette Hardaway was born in 1972 in Fayetteville, North Carolina, the United States to parents, Betty Willis Hardaway (mother), and Freeman (father). She is 48 years old as of 2020. Further, Lynnette grew up with four siblings in a typical Christain Democrat family.

Her mother is a Pastor at Jericho Deliverance Temple Church. Betty and Freeman are a renowned televangelist couple who reside in Raeford, N.C. There is not enough information about Lynnette's educational history.

As of now, the Diamond and Silk sisters are not married. Also, it is not known whether they have tied their wedding knot or not. Neither Lynnette nor Rochelle has shared anything about their relationship. It seems that the sisters are focused only on their professional careers.

As of now, Lynnette is a single woman. Since 2013, she and her sister has been serving as Church Health Missionary for The Bridge Network of Churches. As both sisters are in their late 40s, it is hard to tell if they will marry in the future. Like the sisters, another political commentator, Karen Finney, is also unmarried.

The former Democrat hasn't revealed her exact net worth. Some sources claim that the Diamond and Silk duo has a net worth of at least $1 million, similar to Katherine Timpf. They first gained wide recognition during the 2016 campaign. They have also appeared in several media and public events, giving political commentary.

In the past, Democrats have criticized Lynnette and Rochelle, saying Trump gives them a hefty sum of money for supporting him. However, the sisters denied the claims saying they haven't received a single penny.

From 2018-April 2020, Lynnette and Rochelle began creating political content for Fox News and Fox Nation. As independent contractors, they were paid to license their weekly videos. They must have received around $100,000 for broadcasting their videos at Fox News.

Further, BMM Worldwide announced a major deal with Regnery Publishing to release the memoir of Lynnette and Rochelle in December 2019. Their book titled "Uprising: The Awakening of Diamond and Silk" was published in August 2020. No doubt, the sisters received a generous amount of earning.

Lynnette, along with her sister, used to comment about police brutality on YouTube. At the time, they were hardly recognizable. Then in 2015, the sisters decided to make videos on Trump and his policies. They began to support the Republican Party. Further, they received media attention during the 2016 election.

Fox News hired them in 2018 as regular contributors. Currently, the Diamond and Silk sisters, as conservative commentators, are famous on Facebook, Twitter, Instagram, and YouTube. However, Lynnette and Rochelle are often criticized for supporting Trump and giving negative comments about the black community.

In April 2018, Lynnette and Rochelle alleged that the Facebook policy team labeled their page as unsafe to the community. The matter was brought up during Mark Zuckerberg's Congressional testimony the same month. A representative of Facebook apologized to Diamond and Silk during a House Judiciary Committee hearing.

There was no evidence suggesting that Facebook had censored or blocked their page. Likewise, on April 8, 2020, Twitter temporarily locked their account after they spread misinformation about coronavirus.

Why Fox News fire them?

Since March 2020, Lynnette and Rochelle haven't appeared on Fox News and Fox Business. They were terminated from the contract after spreading misinformation about COVID-19 conspiracy theories on social media.

They used to appear weekly live streaming videos for the Fox nation. There are reporters such as Tucker Carlson and Sean Hannity, who regularly give negative statements about the political and social movements. Yet, Fox News pays them a huge salary. Therefore, the sisters accused Fox News of being racist.