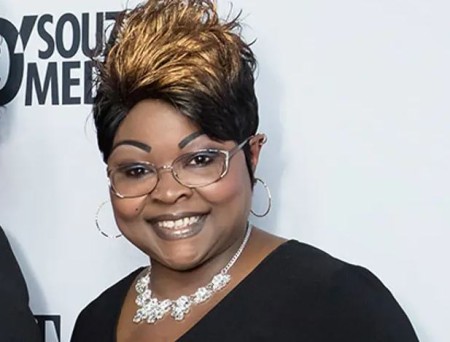 Rochelle Richardson is an American live-stream video blogger, political activist, and former Fox Nation host. She and her sister Lynnette Hardaway are famously known as Diamond and Silk. The duo has a political commentary YouTube channel called Diamond and Silk - The Viewers View. The sisters are registered Republicans who frequently supports U.S president, Donald Trump. Recently, they were terminated from Fox News after spreading misinformation.

One of four children, Herneitha Rochelle Richardson, was born in 1971 in Fayetteville, North Carolina, the United States. She is 49 years old as of 2020. She was born to parents, Betty Willis Hardaway (mother) and Freeman (father).

Her family is the part of Jericho Deliverance Temple, where her mother is a pastor. Betty and Freeman are a renowned televangelist who raised their kids in a typical Christain Democrat family. There is no information about Rochelle's educational history.

Richardson has kept her personal life and relationship status private. It is not known if she has been married or not. Rochelle hasn't shared anything about her love life, neither she is public about her affairs.

As of now, the former Democrat is living a single life. She is focused on her political career. Likewise, Rochelle and her sister has been involved in The Bridge Network of Churches since 2013. The duo works as the Church Health Missionary. Unlike Rochelle, another political commentator, Tara Setmayer has a joyful married life.

There is no exact information about Rochelle's net worth and salary. She and her sister first gained recognition during the 2016 campaign. They used to make several media and public appearances, giving political commentary. However, some sources claim that the Diamond and Silk sisters has an estimated net worth of over $1 million.

Many Democrats have claimed that Rochelle and Lynnette used to get paid for supporting President Donald Trump. However, the sisters have said that they haven't received any financial support to date.

In 2018, Rochelle and Lynnette began creating original content for Fox News and Fox Nation. The network described them as independent contractors who were paid to license their weekly videos for the streaming service. They must have earned over $100,000 while working for Fox.

Additionally, in December 2019, BMM Worldwide announced a major deal with Regnery Publishing to acquire the memoir of Hardaway and Richardson. The book titled "Uprising: Who the Hell Said You Can't Ditch and Switch?-The Awakening of Diamond and Silk" was published in August 2020. Therefore, the sisters might have received a substantial amount of money. Fox News host, Jesse Watters, has a net worth of $5 million.

Until 2015, Rochelle and her sister, Lynnette, were registered as Democrats. They used to upload videos on YouTube about police brutality among the black people. In 2015 the sisters decided to switch their political views and support the Republican Party after watching Donald Trump. At that time, Trump was a presidential candidate and was speaking about America First policies.

Rochelle and Lynnette self-described themselves as Black Trump Supporters!

Slowly, their followers rose, and regular appearances in conservative media circles led to their hiring at Fox News in 2018 as regular contributors. The Diamond and Silk duo has become famous as conservative commentators on social media platforms such as Facebook, Twitter, Instagram, and YouTube.

The sisters are often criticized for their negative remarks regarding social movements such as Black Lives Matter and black people who vote for Democrats. The two often defend the president, making appearances with Trump in the Oval Office, defending him on the campaigns, and retweeting most of his social media posts.

In April 2020, the Republican political commentators were fired from Fox News after promoting COVID-19 conspiracy theories on social media. They used to weekly livestream video spots for the Fox nation. The sisters accused Fox News of being racist as reporters like Tucker Carlson is still working although he gives negative remarks.

Rochelle and Lynnette were last seen on Fox News and Fox Business in early March. Likewise, on April 8, 2020, Twitter temporarily locked Diamond and Silk's account after they spread misinformation about coronavirus.

The matter was brought up during Mark Zuckerberg's Congressional testimony in April 2018. It was found that there was no evidence suggesting that Facebook had censored or blocked them.