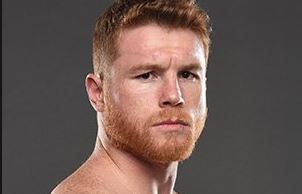 Canelo Alvarez was born on 18 July, 1990 in the suburbs of Guadalajara, Mexico, under the name of Santos Saul Alvarez Baragan, to the parents of Santos Alvarez and Ana Maria Baragan. He is the eldest of eight siblings. Moreover, his family originally belongs to Los Reyes, Michoacán. When Canelo was five, they moved to their current home of Juanacatlán, Jalisco.

Canelo has a image of a ladies man. He has dated so many girls but his life seems to the stable with his long time girlfriend Fernanda Gomez. Fernanda is a model and it's been several years they were having an affair.

There are no reports regarding their marriage. However, we can assure you that, they got engaged. Currently, Alvarez is in Del Mar, San Diego, California with his family which consists of an adorable daughter Emily Alvarez. Scroll down to know more about his relationship.

The world's best boxer has dated so many stunning beauty which ranges from Miss Mexico to the current girlfriend of footballer James Rodriguez. His personal life began attracting media attention from 2003 when he got engaged to Marisol Gonzalex, the 2003 Miss Mexico Universe.

In 2012 he was spotted dating with T.V star Kate Castillo who was 18 years senior to him. Moreover, he also uses to have an affair with Shannon de Lima who was a runner up of 2005 miss universe.

Interestingly, Lima was wife of singer Marc Anthony who is a former husband of Jennifer Lopez. His relationship with Maria Fernanda was a bit serious than others because they got a daughter Emily.

In 2018 he initiated to have a relationship with Nelda Sepulveda who was a businesswoman and works in the ice cream industry, she’s also a talented designer responsible for creating her beau’s training wardrobe. They share a son named,  Saul Adiel.

Link With The Most Wanted Criminal El Chapo

While he used to have an affair with Kate Castillo he was allegedly having an association with crime mafia El Chapo. El Chapo is a Mexican drug lord and a longtime Sinaloa Cartel boss, a multinational crime syndicate. It is known to have been the most effective drug trafficker in the country.

In addition, Canelo's ex-girlfriend Kate was the girlfriend of El Chapo and when U.S DAE got the warrant to take down drug lord, Canelo was accused to hide El Chapo's girlfriend, Kate.

On October 17, 2018, Canelo Alvarez signed a five-year contract worth $365 million fighting deal with the Oscar De La Hoya Group. The contract consists of 11 games. He was decleared to have a match on December 15, 2018, with Rocky Fielding in New York City.

Similarly, between June 2018 and June 2019, Canelo had received $95 million from his company. As per 2020, his net worth is jaw-dropping $120 million according to celebritynetworth similar to American boxer Evander Holyfield.

He clashed with Floyd Mayweather on September 14, 2013. He's missed by judgment. With the fight, however, Saul won $5 million in cash and a share of PPV income, taking his sum to $12 million. On November 21, 2015, Saul Alvarez received $5 million in cash after he beat Miguel Cotton.

In May 2016, Saul Alvarez won an additional $15 million – $25 million from his games. Alvarez faced Gennady Golovkin on September 16, which was a widely awaited match. The match was declared a draw and Alvarez kept his Ring Midweight championship. Alvarez has gained more than $40 million from the combat.

Collection Of Several Cars Worth $8.6 Million

The Multi-Million boxer Canelo has a $170,000 Mercedes SLS AMG Black Series. He has purchased $2.3m on a Bugatti Chiron which is the world's fastest car. He is also the owner of Lamborghini Aventador, and Mustang 500 Eleanor, which cost $1.5 million collectively.

Worth Of His Cars

Canelo bought a $9.6 million property in Del Mar, San Diego, for in 2015. The house is huge, occupying an area of about 12,000 square feet. This comprises of 6 bedrooms and 7 baths, a high roof, timber flooring, a library, a swimming pool, and a stunning ocean view.

In 2018, Saul gained $44 million from sponsors and Endorsement deals. Furthermore, he received a record of $2 million from his endorsement deals which are considered by Forbes. It is sponsored by Tecate, a Mexican beer company operated by the German group, Heineken.

Canelo is one of the most generous pro boxers in the country. He organized a fundraising fundraiser in Veracruz to encourage and support young people to accomplish their goals. He has contributed $1 million to the Mexican earthquake aid in 2017.