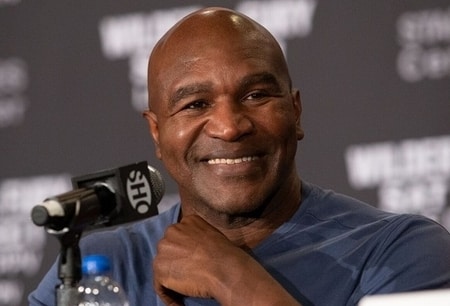 One of the legendary boxers of American history, Evander Holyfield, has a remarkable career. From 1984 to 2011, he competed as a professional boxer. The only four-time world heavyweight champion Holyfield is nicknamed as The Real Deal. He is also an undisputed champion in two weight classes.

Evander was born in Atmore, Alabama, US, on 19th October 1962. He retired at the age of 52 and is ranked number 77 on The Ring's list of 100 greatest punchers of all time. Previously he was ranked in 22nd greatest fighter of the past 80 years back in 2002. Currently, he ranks No.9 in Box Rec's ranking of the greatest pound for pound boxers of all time.

Once a headliner of the marriage after marriage, Holyfield is currently enjoying his single lifestyle. The muscular big guy is currently working as a boxing adviser and is enjoys hanging out with his friends and mates. As well as he is busy interviewing with various news channels about his legacy.

Scrolling through his day to day life, he doesn't seem to date anyone and is instead focused on training himself and other youngster. Not just that, he is also spending a lot of time with his children. Recently, his son Elijah Holyfield signed for Philadelphia Eagles as per USA Today.

Candi Calvana Smith is the third wife of the American boxer. It is known that the two pairs met each other back in the early 2000s. Holyfield was already attracted to her while Candi was yet considering whether to date him or not.

After some months later, the two started dating, and within a year, they decided to engage in a relationship by more than just a lover. In 2003, the pair finally exchanged the wedding vows in a very closed ceremony with their family and friends as a guest. During their eleven years long marital life, they share two children.

Past Marriages of Evander Holyfield

It is no strange that American boxer is married thrice in his lifetime. He exchanged wedding vows with his first wife, Paulette Bowen, back on 17 May 1985, with whom he shares three children. Later due to his involvement with many other women, lead their relationship to end.

In 1991, Paulette filled for a divorce on the grounds of infidelity against him and their six years relationship ended up like a blink of an eye. Just after three years of separation, Evander found his new love life, Janice Itson, at a religious crusade in Philadelphia who was the doctor by profession.

After dating for more than a year, the couple exchanged wedding vows on October 4, 1996. The pair enjoyed their marital life for only six years and got separated on 10 July 2000.

The net worth of Evander Holyfield in Thousands

The legendary boxer has a total fortune of $500,000 as of 2019. Having an excellent record of 44 wins, ten losses, and two draws in the 57 professional career fights, he retired at the age of 52-years-old.

During his retirement in 2014, he has a net worth of $238 Million, which includes sales of his mansion to Rick Ross in $8 Million. In 1990 he earned more than $34 Million, which consists of the ticket sales of the title fight between him and Douglas.

Later in 1996, the fight between him and Mike Tyson was one of the greatest fights in boxing history. That following year he gathered a total of $93.15 Million. Once a headliner of the money maker currently serves as a boxing adviser and makes around $40,000 annually.

The most celebrated boxers of all time Holyfield has a very remarkable career without a doubt. Though having such an incredible career, his personal life is a little bit messy. During his young age, he has engaged with so many women which lead him to produce many children.

During his lifetime, he became father to eleven children. Many of his offsprings are also receiving fame due to their professional success. Recently, Elijah Holyfield just signed for Philadelphia Eagles.