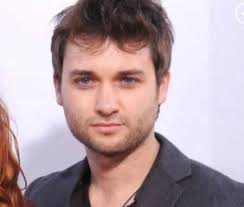 If you've ever wondered who is the guy rocking the guitar in Katy Perry's shows, then you're in luck; he is Casey Hooper. He has done many shows alongside Katy.

Casey was born on July 16, 1986, in Des Moines, Iowa, in the United States of America to parents Dave Hooper and Rebecca Cartwright. He has a younger brother named Spencer Hooper. Let's find out if he is married.

Casey is a married man for quite some time now. He has settled down with American actress Alexandra Breckenridge. Where and when he met his love is not known, but they seem to be together for a long time.

The lovely pair got engaged on September 17, 2014. They decided to get married a year after their engagement on September 13, 2015. They were bound to each other among family and friends at Dunton Hot Springs, Colorado. The ceremony took place in the middle of a beautiful field.

The guitarist is a father of two beautiful children. The couple welcomed their first child Jack Breckenridge Hooper into this world on September 3, 2016.

The new parents were busy and soon announced that they were pregnant again just eleven months after the birth of their son. The couple announced their pregnancy via Instagram with a picture of his wife Alexandra and her baby bump.

Their daughter was born on December 6, 2017, and named Billie Breckenridge Hooper. The family lives in Atlanta, Georgia.

The guitarist for famous singer Katy Perry must make a decent amount touring with the artist. His earnings aren't disclosed, so let's take a look at his wife's net worth.

Casey's wife Alexandra is worth an estimated $1 million to $5 million. She is an actress and has appeared in many TV shows and films. She started her career from Freaks and Geeks in 2000. Her major role came in 2002 movie Big Fat Liar as Jaine Shepherd.

Hooper started his career right after graduating from high school in 2005. He was always into music and wanted a career in music. He appeared in multiple auditions for different artists and was finally selected by Katy Perry.

The musician was rejected by Selena Gomez, Adam Lambert, and Avril Lavigne. He has performed in many destinations around the world, including the Super Bowl XLIX half time show, the Grammy's, and IPL season opener alongside Katy.

Alexandra is multi-talented and has voice over roles as well as acting roles. She has voiced multiple characters in hit animated show Family Guy. According to her, she was called for numerous roles because the show's creator Seth MacFarlane was impressed by her voice.

The actress has made appearances in two seasons of American Horror Story in 2011 and 2013. She also played Jessie Anderson in AMC's The Walking Dead in season 5 and season 6 of the show.

In 2017, she landed a role in NBC's Golden Globe-nominated show, This Is Us. She was a regular in season 2 and only appeared in one episode in season 3. She starred alongside Milo Ventimiglia, Mandy Moore, Sterling K. Brown, Justin Hartley, and Chris Sullivan.

The actress is now starring in Netflix's Virgin River, which premiered on December 6, 2019. The show was renewed for ten episodes in December of the same year.