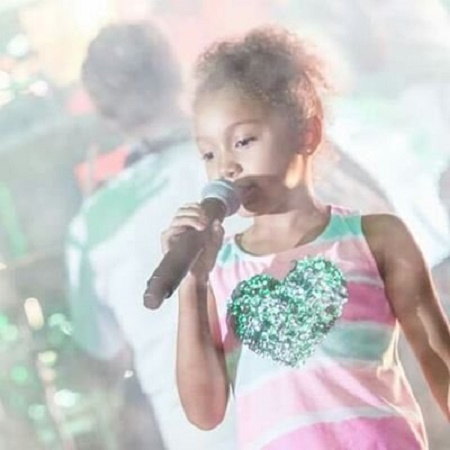 Every child is an artist, but the question is, will they stay artistic when they grow up? In a similar context, it will be easy for 11-year-old celebrity kid, Casie Colson Baker to build her career in the entertainment industry with the influence of her father.

Baker is renowned for being the celebrity daughter of rapper Richard Colson Baker, professionally known as Machine Gun Kelly and his ex-partner, Emma Cannon. Likewise, Colson is the only child, who was born on 23rd July 2008.

It would be inappropriate to discuss the child who is just in her middle childhood. Therefore, let's put some light on their parent's love story.

Machine Gun Kelly and Emma Cannon started their love relation while they were both teenage. They first met while attending the concert of an American rock band, Blink 182, but didn't approached then. A day after, they encountered in a Tattoo shop named Ohio City Tattoo, where MGK introduced himself.

During that time, Emma was getting inked the motto of Kelly's "Lace Up" tattoo under her breast. Later, they had a good startup conversation and eventually started dating each other.

Although their romantic relationship ran for a short period of time, they welcomed a baby daughter, Casie. Richard's age was only 18 at the time when he welcomes his first child.

Still, the dating records and the information of their separation is missing. Surprisingly, MGK and Emma have a proper term in between even now. Although it's hard to tell who has the daughter's custody, MGK can be frequently seen with his daughter.

MGK has a record of link up with several high-profile personalities. Reportedly in the year 2013, he had a fling with adult actress Rachel Starr. Two years later, in 2015, he dated a famous model, Amber Rose. Their hook up went quite viral as they both appeared together in many events.

The star then had a short duration flirtation with singer, Halsey in 2018.

Relationship With Daddy and Mummy

Rather than her mother, Colson Baker is often spotted with her rapper daddy, attending various events. At the current times, MGK uploads many photos and videos of Casie via Instagram.

When it comes to her mother, Emma, tends to stay away from the spotlight as much as possible. Hence, it won't be wrong to say that the baby's momma must be happy to see her daughter Casie hang out with her dad.

Kelly likewise received immense popularity by recording a diss track directed towards the American rapper, songwriter, Eminem. Not only that, but he also gained quite a fortune from his hits.

Along with aid the income through his hits, the 2012 MTV Europe Music Awards winner artist has successfully amassed a net worth of $8 million as of 2019, while his former partner, Emma's wealth is around $200,000.

Being born to a celebrity father, Casie is probably getting raised in an affluent manner. Undoubtedly, she is being fulfilled by everything that money can buy alike other kid stars, Constanza Creel Gonzalez and Meadow Rain Walker.

At the age of 8, Casie, daughter of musician, attended Kids Choice Awards of the year 2017 alongside Machine Gun Kelly.

On 23rd March 2019, MKG and Casie moreover attended Nickelodeon’s Kids’ Choice Awards 2019 in Los Angeles, California, at USC’s Galen Center. In addition, MGK also attended the same event this year with Casie by his side; only the difference is that she is all grown up now.

On 14th September 2018, Eminem’s new diss track, KILLSHOT, was released. Eminem aimed for a long time on this diss track for MGK.

“Here’s that autograph for your daughter, I wrote it on a Starter cap.”

Their dissing battle started after MGK talked about Eminem, daughter, Hallie was Hot as F**k back in 2012.

For more articles on Celebrity Babies, Stay with marriedceleb.