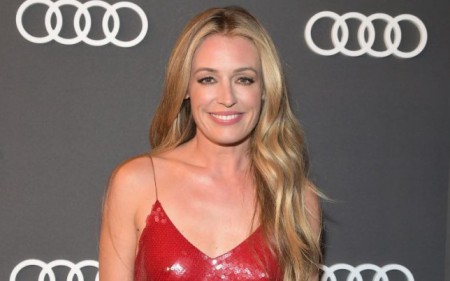 The 42-year-old, Cat Deeley is an English television presenter who won the 2001 BAFTA Children's Award for hosting the children program, SMTV Live. Additionally, she works as an actress, singer, and model as well based in the UK and the United States.

Deeley is best known for hosting the dance competition show, So You Think You Can Dance since its second season, presenting every episode since 2006. The show has judges like Maddie Ziegler and many more.

The gorgeous television presenter is a married woman. Deeley's husband is Patrick Kielty, a renowned comedian and television personality from Northern Ireland. The couple who have been friends for a decade married following a ten-month romance.

Their wedding ceremony was held on September 30, 2012, at Saint Isidore College Church, Rome. Cat and Patrick have been married for seven years and are still together without any complications.

From Best Friends To Loving Couple

As mentioned, Cat and Patrick were longtime best friends. It was back in 2002 that they first began a friendship while presenting Fame Academy together.

YouTube: Cat's Husband, Patrick, reveals how he wooed her!

After ten years of friendship, Patrick surprised Cat from flying from Ireland to Los Angeles on her birthday lunch in 2011. Recalling the moment, Cat revealed:

"I went to lunch and in walked Patrick," she said. "There was  strange little moment like in the movies when everyone else just seemed to melt away. We spent the afternoon together just drinking, laughing, talking. He told me he wanted to be with me forever."

At the present moment, Cat and Patrick are living a happy married life enjoying the parenthood. Till now, they are not involved in any controversies.

The former SMTV Live host and her comedian husband, Patrick, are proud parents of two lovely sons. Cat and Patrick announced that they were expecting their first child on September 4, 2015.

While both of their careers are thriving, the couple revealed neither of them wants to sacrifice anything to do with their kids for a career.

Husband and Son were caught in a Gun Scare

In July 2019, Patrick and Milo were caught up in shooter scare at Shake Shack in Century City Mall. Afterward, Cat said that she is considering leaving the US. In an interview with the Sunday Telegraph she said:

"They had been in a Shake Shack in Century City Mall and there was a shooter scare. Everyone was either told to lie behind the counter or pushed into the loos. People were screaming and crying. Then as they were all hiding, the FBI turned up with guns."

Car noted that the number of shootings incidents is much higher in the state's area, with the National Rifle Association holding much power.

Cat Deeley's Past Marriages and Affairs

Before Patrick Kielty, Cat had been in a few relationships and has been married once. Her first husband is Mark Whelan, a public relations executive. The couple was married from 2001 to 2006.

How Much Is Cat Deeley's Net Worth?

The five-time nominee for a Primetime Emmy, Miss Deeley, has a net worth of $12 million. Throughout her career, Deeley managed to build a fortune out of her modeling and television career.

Cat is a regular presenter of the American televised dance competition show So You Think You Can Dance since 2006. Her salary per episode is around $60,000. Apart from her tv career, she is also involved in numerous charity works.

Since 2003, Deeley has been a supporter of London's Great Ormond Street Hospital. Additionally, she is also an active supporter of UNICEF.

Talking about Patrick, he has a net worth of $8 million as of 2019. Also, he is extremely active in various charities, including Soccer Aid and Sport Relief.

In September 2006, Cat purchased a two-bed, two-bath, 2,988 square-foot architectural style home in the Beverly Crest area of Los Angeles for $2,699,000. The luxurious home has an office, gym, two guest suites, pool & spa along with an entertaining area.

Also, back in 2014, the couple listed their Northern Ireland base house for over $550,000. They have permanent residence in America but are regularly seen in Northern Ireland.