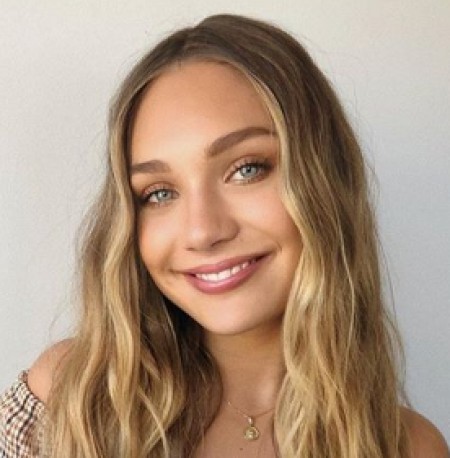 Maddie Ziegler is an American model, dancer, and actress. Furthermore, She appeared as the judge for the reality dance show So You Think You Can Dance. Her 2017 memoir was New York Times Best Seller.

Maddie Ziegler was born on September 30, 2002, to her parents Kurt Ziegler and mother Melissa Ziegler Gisoni. She comes from Polish, Italian, and German descent. However, Ziegler's parents got divorced in 2011. Further, she has two elder siblings from her father's previous marriage. Many of her fans are curious to know more about her relationship. So, let's explore more into that.

Maddie was in a relationship with Instagram star Jack Kelly. He is the son of former New York Yankees infielder Pat Kelly. They both dated for a year before parting ways. However, the love birds have not disclosed the reason behind their break up. Sources claim that the boyfriend-girlfriend parted away due to their differential background.

As of now, Maddie is seen with Stevie Wonder's son Kailand Morris after meeting him on DWTS Junior. She is an excellent friend of him, but the pair has not revealed any details of their relationship. However, she is seen with many handsome men in her photos. Yet her relationship with any man has not been confirmed. Hope, she has found the love of her dream.

Ziegler recently went for a tour with her sister to Australia and New Zealand. The sisters are very much close to each other. In addition to that, they run their website Ziegler Sisters. They are also involved with many philanthropic works.

Maddie has made a massive fortune throughout her life. Her asset is estimated to be over $5 million. She earns a reasonable remuneration from her dancing shows. She makes up to $2,000 in payroll per episode. Likewise, her overall payment is expected to be over $40,000.

Ziegler is also an influencer; she has garnered a excellent wealth through her endorsements. She also brands clothing line, outfits. Moreover, she modeled for Tiffany and Co, which brought her sumptuous money. She has also published her writings, which has grossed her a hefty amount.

Who is Maddie Ziegler?

Maddie Ziegler was born on September 30, 2002, to her parents Kurt Ziegler and mother Melissa Ziegler Gisoni. She grew up with her siblings in the USA. Apart from that, not many details are provided about her childhood.

Ziegler was into dance from a very early age. She took dancing lessons from the age of two. While she was four, she was into tap dancing, ballet, lyrical contemporary. She, along with her younger sibling Mackenzie Ziegler appeared in many shows.

Maddie joined the Abby Lee Dance Company and won numerous titles in the state and national competitions. Likewise, she won the 2014, Dancers Choice Award for Favourite Dancer Under 17. She, along with her mother, appeared on the show Dance Moms.

Maddie stands at a tall height of over 166 cm and weighs over 46 kg. Additionally, her physical features look quite identical to American singer Chynna Phillips.

She possesses blonde hair, and her eye color is light green. She has a well maintained, slim figure.

Maddie has utilized her social media platform to gain sponsorship. Similar to American actress, Mallika Kinison, she has also garnered a considerable fan base.

For further updates on American Dancers, then subscribe to Married Celeb!!!