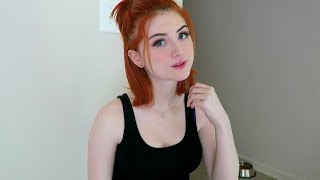 Celestia Vega is a prominent American YouTube Star as well as a social media personality. She is best known as a gamer on the live streaming network, Twitch with over 132,678 followers. As present, she is well-established as a YouTuber with over 578 thousand+ subscribers as well as Twitch Star with 132,678 followers.

Being such a huge gamer as well as a social media personality, many fans and followers eagerly wants to know about her earnings through social media platform as well as the lifestyle currently she is living in. So, here we give you the details regarding her social as well as personal life.

She openly declared herself as bisexual in an interview after stating that "she prefers females". Moreover, the 21 years old social media personality, Celestia is probably a single woman at the current moment.

To date, she has not revealed anything about her dating and flings to the public as well as no past romantic encounter of YouTuber has been recorded yet. She is a secretive kind of person who wants to keep her personal details under wraps.

If you are familiar with her YouTube channel then you have must known, she is very down to earth in behaviour. In her videos, she can be seen with multiple guys in collaboration that doesn't means she is in an intimate relation with everyone. May be, she has felt cosy being with someone, but until her declaration every details of her bosom remains unconfirmed.

Likewise, we can often see her cats in her video on YouTube and also on Livestream.

Rise to Stardom as a Gamer

Celestia Vega began her professional gaming career in March 2015 by playing RuneScape streaming on Twitch. However, she started gaming when she was just 3 years old. Since 2015, she started playing and streaming games such as The Elder Scrolls IV: Oblivion, Animal Crossing: Wild World on Twitch.

Moreover, she has also collaborated with a fellow Twitch streamer, Zoie Burgher and had the chance to meet the well-known YouTuber, Roman Atwood.

Net Worth and Life Style

Vega has earned a decent sum of fortune from multiple social media platforms such as YouTube, Twitch, and Instagram. As of 2019, Celestia's total amassed wealth is around $200 thousand.

Besides, she is also an adult actress but in terms of her salary through adult erotica movies is concealed.

Lucrative Line of Work as a YouTuber

In November 15, 2015, Celestia started her first YouTube channel by name Celestia Vega. Since the day, she began getting a lot of attention because of her interesting content on her videos. Her vlog has not only reached out thousands of views, but also earned quite a fortune.

As her channel set in motion, she gained numerous of subscribers which is around 578K at the present time. She began bagging quite a sum from adsense along with revenue from her thousands of views on video.