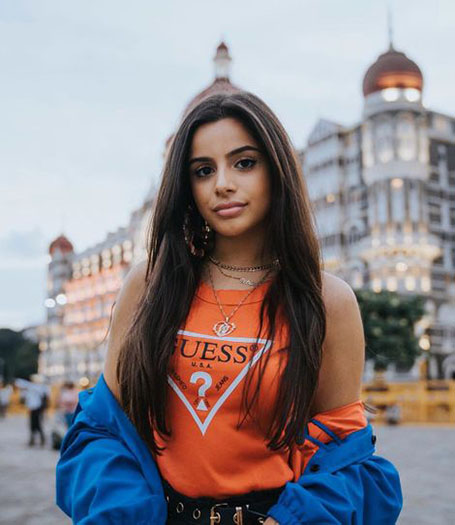 Born to an Indian father, Australian based singer and songwriter Celina Sharma is the favorite pop idol for Indian as well as Australian youths. After releasing her debut single Say Yes in 2018, Celina has collaborated with several Bollywood rappers and pop artists.

Celina was born in 2002 in Sydney, Australia. She was raised by her father and mother Natalie Sharma in a Punjabi Family. Celina has an elder brother named Rohan Sharma. With interest in singing from a young age, Celina attended David Jaanz School of Singing, Melbourne.

17-year-old Celina might be a social media star but she is not so outward like her music when it comes to her real love life. She has never shared her relationships details with her fans and followers yet. Moreover, there are no rumors about her marriage, divorce or dates.

After releasing her singles at such a young age like British rapper Leondre Devries, Celina is thriving forward to make her name in the Bollywood industry. Most of her music videos are shot in Indian cities like Mumbai. In an interview with Indian online news magazine Mid-day, she said;

I know that this is a beautiful country for singers and music producers to thrive. I am looking forward to being part of the industry.

Look at Celina's trip to Mumbai:

Celina is way too far to be muddled up in romantic relationships right now. Blessed with a gorgeous dusky complexion, she has become a fashion idol, especially for teens.

How Much Is Celina's Net Worth?

The young singer is enjoying her lifestyle with a net worth of $100,000 to $200,000 which is less than MattyBRaps. Similarly, Celina's songwriting brings her a decent amount of royalty. She has also performed at the Sunburn Music Festival, Mumbai with international artists like; DJ Shaan, Yoshua and CNCO Miami.

Besides music, Celina has also offered her roles in films like High School Musical and Camp Rock. On top of that, she has acted for different brand endorsements and products. Back in 2019, Celina was signed by Universal Music, UK's largest and major record label.

She had proudly announced the news with her fans and followers on social media. Group Currently, the Chalo singer resides in London.

Celina Was Inclined To Music Since Young Age

Since her childhood, Celina listened to various artists like; Ariana Grande, Selena Gomez, Chris Brown, Miley Cyrus, Alicia Keys, and Beyonce. She started singing from the tender age of seven.

Eventually, Celina was chosen as the finalist of the Sydney Eisteddfod Junior Singer of the Year competition. For her dedication to music, Celina was named as 2019's BBC Asian Network Future Sounds Artist.

Popular singles by Celina include; 2019 ICC Cricket World Cup anthem and Lean On. More to that, she has uploaded cover songs of internationally acclaimed artists. In her 2018 interview with Mid-day, she told that she hoped to work on and produce more singles after returning to Australia. Therefore, fans might hear from Celina anytime soon.