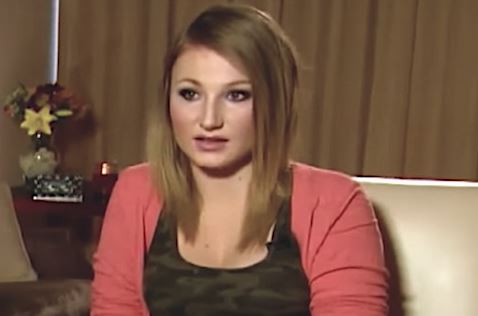 People rise to fame and gather media attention through their hard works and talents. However, there are a lot of celebrities who are famous for their relation with reputed stars like Chelsea Belle O'Donnell. She is the daughter of a famous American comedian, actress, producer, and TV personality, Rosie O' Donnell.

Chelsea was born on 22 September 1997 in Michigan, the USA, under the birth sign, Libra. Moreover, she belongs to white ethnicity and holds an American nationality. Please read the article until the end to know about her personal life.

Chelsea is currently in a relationship with her new boyfriend, Jacob Bourassa. Jacob has criminal records of conviction for endangering safety by use of a dangerous weapon and criminal damage to property.

For his crime, he was sentenced to 10 days in jail. Together, the couple shares a daughter named Skylar Rose, who was born in December 2018. She is two years old as of 2020.

The news of Skyler born became the talk of the town when Chelsea's mother, Rosie O' Donnell, posted photos of her grandchild on Twitter and wrote herself 'nana.' Because of Skyler, Chelsea and Rosie's bond has become more robust. During an interview with The People, she said,

"She's doing better now, and we're both communicating with each other."

For now, the couple is living a happy married life without any break-ups and separation rumors.

Miscarriage With Her Ex-Husband, Nick Alliegro

Chelsea was previously married to ex-husband, Nick Alliegro, who is a plumber by profession. They exchanged their wedding vows on 1 July 2016 secretly. Then a couple, Nick and Chelsea, first met at a Dunkin Donuts and started dating until tying the knot. After a year of their marriage, Chelsea announced that they were expecting a baby.

Unfortunately, they had a miscarriage, and it became the reason for their divorce. O' Donnell filed for divorce on 19 April 2018, and she started dating her current boyfriend, Jacob. Back in August 2015, Rosie reported Chelsea ran away from her. After two weeks of her report, she was found in New Jersey with a 25-year-old man whom she met on Tinder.

The man was charged with child endangerment and disturbing obscenity minor, which was dismissed in March 2018. Not to mention, Chelsea's mother, Rosie was previously in a relationship with Michelle Rounds.

Net Worth Of Chelsea O' Donnell

Chelsea has been very secretive towards her professional life. To date, she has not revealed anything about her profession. So, her net worth is still under review as of 2020.

However, she might be earning a decent amount of money for her livelihood. On the other hand, her mother, Rosie's net worth is around $150 Million as of 2020 which is similar to Hugh Grant.

She earned all of her money from her multi-professional career. She is a comedian, actress, producer, author, and television personality. She has appeared in over 20+ movies and 20+ TV series until now. Without a doubt, Chelsea is living a decent lifestyle with her mother's earnings and net worth.