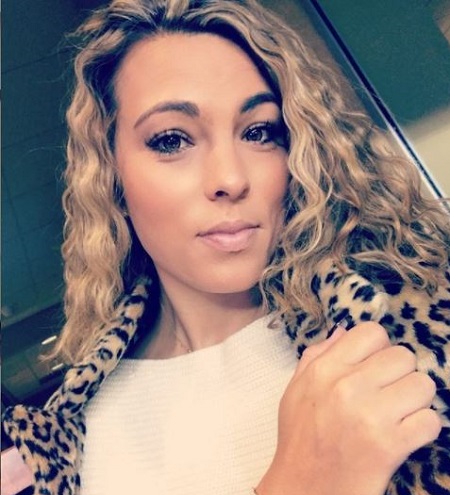 Chelsie Kyriss is an Instagram star who came to limelight after sharing an intimate relationship with the popular sportsman, Antonio Brown. He is a football wide receiver who is currently playing for the Tampa Bay Buccaneers of the National Football League.

He has previously played with clubs like Pittsburgh Steelers and Oakland Raiders where he has gathered numerous awards and titles. Today Kyriss is someone that understands the abject weirdness of Antonio's whole life.

Today, Kyriss, 31, and her fiancee Brown, 32, have an incredibly rocky history after facing a huge conflict and lack of understanding. As we all know they share long love life and a marvellous couple's journey.

They first met one another back in 2012 and has been together for more than a few years. But, the report has claimed that they started having trouble in their relationship back in 2018 due to Antonio getting involved in numerous off-the-field controversies.

In 2018, the lovebirds got separated after Antonio's erratic and volatile behaviours towards her. In December 2019, Brown even attempt to eject Chelsie from his Florida home but he failed.

Through all the crazy ups and downs, the couple reportedly got back together during the week of the during Super Bowl weekend.

He apologized for his mistake around the time of their reconciliation in 2020 through the Instagram post on February 2 by posting the family photo. He wrote: "First and foremost, I will love to Thanks the highest 'God' for allowing the 'God' that's in me to really look deep into myself".

Nevertheless, the parents of three have been in on and off relationship for several years. Further, Antonio dated a Jena Frumes, an Instagram model before rejoining with Chelsie.

Yes, the lovebirds are set to become husband and wife very soon after multiple breakups and disagreements. On March 13, 2020, the NFL star revealed his engagement to Kyriss by rubbing his wife-to-be back in an embrace via the Instagram story.

He captioned: " I Just Proposed @Chelsie (Chelsie Kyriss)'. The thing comes shortly after months of chaos, they reconciled. But Chelsie's not showing her diamond engagement ring that Antonio gave her while popping the question.

Together, Chelsie and her long term boyfriend  Antonio shares three little children, all under the age of 5. Constantly, they share pictures with their pride and joy on their Instagram account.

They gave birth to their firstborn son Autonomy Brown in 2014. The following year, they welcomed Ali Brown. On August 1, 2017, their youngest son Apollo Brown was born.

Furthermore, Antonio has two other children from his previous failed relationships. One son Antonio Brown Jr. and daughter, Antanyiah Brown, the daughter of Wiltrice Jackson. Similarly, Chelsie has two daughters from her previous relationship, Brookly Kyriss, and Kellen Kyriss.

Chelsie Kyriss is an Instagram model who has an estimated net worth of $300 thousand. Today, she has 109,000 followers on her Instagram account. Previously, she worked as an assistant teacher, and a store manager.

On the other hand, her fiancee, Brown is one of the successful NFL players who has a net worth of $20 Million as of 2020. During his long NFL career, he has had over $71 Million contracts deal with NFL clubs. In 2012 he signed five years for $42.5 Million with Stellers.

Later in 2017, he signed four years contract deal with the Steelers for $68 Million. The following year he was paid over $15 Million only in salary which made him one of the highest-paid wide receivers in NFL history. Moreover, he has played with numerous legendary NFL players including Tom Brady.

Chelsie was born on August 31, 1989, in Springboro, OH U.S. However, the information regarding her family background is unknown to the media. So far, she holds American citizenship and is of white caucasian ethnicity.

Regarding her education, Kyriss completed her graduation from Sinclair Community College in 2010. Later she attended Perimeter College at Georgia State University in Decatur, Georgia.