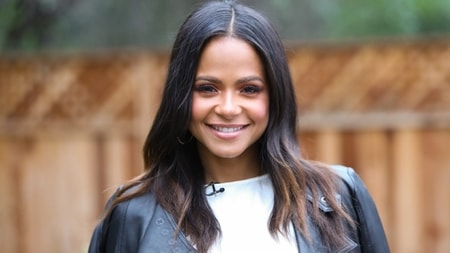 R&B singer, Christina Milian, is someone who doesn't need an introduction perhaps. As of now, the singer is pregnant with her another child with her partner Matt. On her Instagram page, the singer/ actress is displaying her baby bump, already attracting attention for her unborn child.

She was born as Christina Flores on September 26, 1981, in Jersey City, New Jersey, to parents Don Flores and Carmen Milian. Further, Milian grew up with two of her siblings Danielle and Elizabeth. She moved to Maryland while she was young. Now, let's know more about her married life and children in the article below.

Who is Christina Milian's Husband?

Other than being a famous artist, Christina is a beautiful woman in person. Supposedly, she robbed many individual's hearts of the entertainment industry. The singer/actress is currently in a relationship with French actor Matthieu Tota a.k.a Matt Pokora.

The pair started dating each other since August 2017, and their love looks pretty solid. Scrolling through her Instagram, we can find many pictures of her lover and her daughter Violet. Currently, Milian is pregnant with the duos' first child together.

According to the Daily Mail, she recently showed her baby bump via her social media. The pair is expecting a baby boy together.

Previously, Milian was romantically linked with actor Nick Cannon. The pair met on the set of the movie Lover Don't Cost a Thing in 2003, and eventually, the couple started dating. After being in a love relationship for over two and a half years, the love bird could not stay together and parted their way in 2005.

Shortly after the separation with the first boyfriend, Milan began dating musician Terius Youngdell Nash A.K.A. The-Dream. After a short period, the couple went on to tie the knot in May of 2009.

From their nuptials, Milian gave birth to a baby girl Violet Madison Nash on February 26, 2010. Similarly, The-Dream had three children with ex-wife Nivea Hamilton. Do you remember Nivea? Yes, the girl who is famous as the ex-wife of Lil Wayne. She even shared a son Neal Carter with Wayne.

Unfortunately, Milian and Dream separated in 2009, but the divorce was finalized On October 23, 2011. Later on, Christina started dating James Prince Jr and further got engaged in April 2013.

Furthermore, Milian came out of the relationship after moving out of the couple's house in 2014. Milian was associated with rapper Lil Wayne for a short time in 2014.

Milian has gained a massive wealth from her music career. She earns a good income from her brands and endorsements. All through her career, she has stashed a net worth of over $4.5 million.

Moreover, her former husband, The-Dream, has a huge asset of over $50 million. Likewise, her ex-boyfriend Lil Wayne possesses over $150 million in the property.

Milian was interested in art and creative from an early age. Later, her mother took her to Los Angeles at the age of 13, along with her two sisters for their better future.

Milian then landed with a job of a host for the Disney Channel's series Movie Surfers. Besides, she also wrote several songs in the meantime. She made her first professional music appearance on rapper Ja Rule's studio album Rule 3:36 and performed the song "Between Me and You".

Further, Milian went on to work with some of the well-known musicians such as Usher, Kanye West, and Lil Wayne.

Milian stands at a height of over 157 cm and weighs over 54 kg. Her body measurement is 36-23-35, including bust, waist, and hips, respectively.

Similarly, she has a pair of brown eyes, and her hair color is black.

Other than being a famous personality in the entertainment industry, Christina is also quite popular in social media. She has 4.49 million followers on her Facebook and voluminous fans of 5.8 million on her Instagram page.