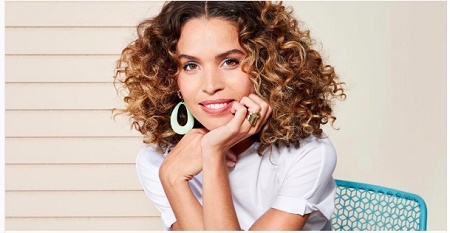 “Love yourself enough to walk into only the rooms and situations that show care and love for you." Well, this quote was written by American artist, poet, activist, and author, Cleo Wade.

Cleo, also an Instagram celebrity, is best known for her beautifully illustrated book "Heart Talk: Poetic Wisdom for a Better Life" which was published on 6th March.

The gorgeous author Wade is already taken by the love of her life, Simon Kinberg. Her partner is a screenwriter and producer known for films like "Mr. & Mrs. Smith" and "Sherlock Holmes.

Wade and her boyfriend Kinberg is sparking their love life together like a perfect couple. Moreover, Cleo often shares their romantic pictures on their respective social sites. On the other side, her boyfriend Simon also shouts his love for her by posting images with her on his Instagram.

Recently on 2nd August 2019, Cleo published an image with her man on the occasion of Simon's birthday wearing the same dress and captioned it "I love you! So happy you were born." Interestingly, her father Bernardo also wished his future son-in-law, a very happy birthday.

Apart from that, she is a supporter of Hillary Clinton and is very close to Ketty Perry.

Is Cleo Wade proud Mom to be?

Author of Heart Talk will be the supportive mother of a forthcoming baby. Surprisingly, on September 11, 2019, she announced her pregnancy by posting an image via Instagram.

In the post, Wade said that she and her soulmate Simon are expecting their first child together. She even stated:

Pretty excited to bring this special guest on tour with me next month. And by special guest I mean my bump, not Simon- tho he will be there on most stops too so say hi if ya see him! See y’all soon.

Soon after the announcement of the pregnancy, the fans can't stop gushing to her post. On the other side, Cleo and his beau couldn't wait for more to welcome their little ones.

The politician Senator Cory Booker, 50 and the poet Cleo, 30, was once in a secret relationship from 2006 to 2018. Former boyfriend, Cory Booker even told in 2017 with NorthJersey.com that he'd “been a bachelor too long” and hoped his relationship with Cleo would lead to marriage.

The former couple even the pair attended a fashion week event held at a warehouse in Brooklyn's Bushwick neighborhood in 2018. In the book’s acknowledgments, Democrat of New Jersey writes:

“To my partner, Cory, for being a constant source of light and inspiration in my life. You have truly been my rock during this process.”

But later, the speculations and rumors spread by political rivals that Cory may be gay. Thus, this may be the reason for Cleo and Booker's separation.

As we all know, Cleo Wade is an inspiring poet and artist from New York, New York City. Thus, evaluating all her income streams, Wade’s net worth is assumed to be around $200,000 to $300,000 as of 2019, which is similar kind to Betsy Woodruff.

Cloe as an Author

American author, Cleo wade has published three books Heart Talk Workbook(2020), Heart Talk: Poetic Wisdom for a Better Life(2018) and Where to Begin: A Small Book About Your Power to Create Big Change in Our Crazy World (2019).

Her book Heart Talk: Poetic Wisdom for a Better Life's price is $9.99 in amazon.com and next book Where to Start: A Small costs $5.46.

Cleo uses Instagram to share her poetry as a platform and says her work as a public service. She attempts to deliver powerful messages, mixing simplicity with positivity, femininity, and arresting honesty.

“For everyone who’s feeling alone in certain feelings. So if the presence I have can make anyone feel less alone, those are the best days."

Cleo creates large scale public art pieces with the belief that art is for all people.

In addition, Wade has one younger brother, Bernardo Wade. At the age of 6, her parents divorced, and she started living with her father.

For more interesting biographies of your favorite celebrities marriedceleb.