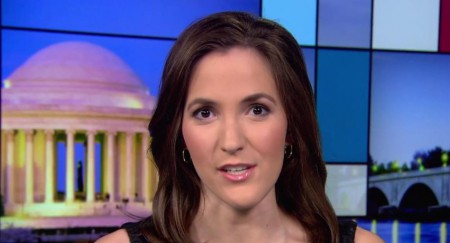 The Daily Beast Reporter, Miss Betsy Woodruff believes her father's motto, which is "Work hard, play by the rules, and every gun is a loaded gun." Growing up in a disciplined environment, she has risen to become a dedicated journalist.

Betsy, who began her career in 2008, is currently working as a Political Reporter for The Daily Beast. She has covered several topics from crusades to Capitol Hill and has appeared on Fox Business and MSNBC.

Soon to be Married

The reporter who covers the subjects of federal law enforcement is soon going to be married. Betsy found her love in a man who shares the same profession as hers. The name of Woodruff's fiance is none other than Jonathan Swan, a renowned Australian journalist.

She and her longterm boyfriend announced their engagement in March 2018. Their dating history is still a matter of gossip. But, in late 2014, Betsy revealed about having a boyfriend (without mentioning a name) on her Twitter.

Later, Woodruff shared a picture showing off an engagement ring while Jonathan was seen kissing her cheek. The post seen on March 12, 2018, raised more intimate questions about the lovebirds.

Why is Jonathan Swan Familiar?

If you follow daily updates of global politics, then you have probably seen or read about the controversies surrounding the current President of the U.S. And Jonathan is one of the well-renowned political journalists who broke several stories about the Trump administration.

You might not know, but Jonathan received the Wallace Brown Award in 2014 for a most outstanding young journalist. Also, he was named one of the 16 Breakout Media Stars in 2016.

It is common for celebrities to get snapped when they appear outside their personal surroundings. The moment they step in public, cameras, and gossip begin to flow rapidly. However, some people are so cautious regarding their personal life, and even the media can't track them.

The case mentioned above is valid for Betsy and her lover. The journalist couple never revealed about their dating history. Also, the public was unaware of their relationship until Woodruff shared a picture with Swan on her Facebook.

Now, we know that the couple is engaged, there is still a lot of buzz going on about their upcoming marriage ceremony.

When is their Wedding?

Despite being engaged for more than a year, Woodruff and her fiance have rarely spoken about their nuptial ceremony. Some online sources claim that they will marry in early 2020, but these are all rumors.

Till now, Betsy and Jonathan are happy with their solidarity. They reside in Washington, D.C, and soon they might be planning for a child.

The winner of Michigan Press Association award, Woodruff, has a net worth of $500,000. Her earnings and salary have risen as of 2019. She has covered some of the high-profile officials from Washington D.C such as the 2016 presidential campaign.

Further, the stories of the White House and Trump's administration helped to increase her net worth along with popularity. Her professional journey is than a decade, but still, she has managed to gain decent net worth.

Just for the information, her fiance, Jonathan enjoys an impressive net worth of $2 million. His annual salary ranges somewhere between $55,000-$70,000.

Salary as a Reporter

From The Daily Beast, the 29-year-old reporter earns an average annual salary of $70,000. Her source of wealth is entirely journalism. Also, she frequently appears on the Fox Business and MSNBC network sharing her analysis and opinions on current events. Former Daily Beast employee, Tony Dokoupil earned $120,000 in a year.