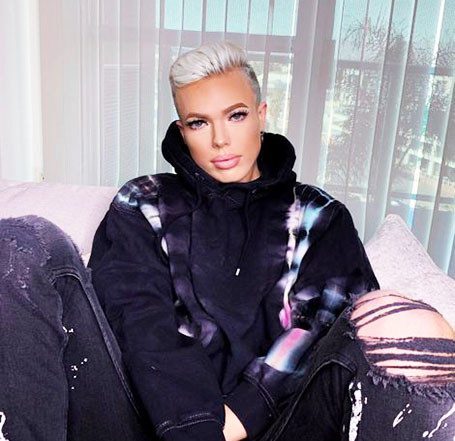 Cole Carrigan is an American makeup artist who is popular on Youtube for his 3D makeup skills. He is a self-taught artist who first started by uploading tutorial videos through his YouTube channel beginning in May 2013. He then started sharing photos of his works through Instagram and instantly thousands of followers were behind Cole.

Cole Wesley Carrigan was born on July 3, 1998, in Dallas, United States. Although raised in Dallas, Cole later moved to Los Angeles to pursue a make-up artist career. To this day, Cole has made his home in the wealthy neighborhood of Los Angeles.

Like many transgender internet and YouTube personalities, Cole is proud of his sexuality. But he hasn't revealed his romantic partner yet. Cole regularly collaborates with fellow vloggers and YouTubers with whom he seems very close. But none of his friendships prove to be love relationships.

The famed make-up artist has not stolen headlines for any relationships and marriage rumor. The talented FX artist just wants to make his fans and followers updated with his posts and videos. His devotion to makeup art shows that Cole is in no hurry in being someone's partner. Unlike Cole, German makeup artist Natalia Osada is married.

What Is Cole's Net Worth?

He also makes massive sum by brand endorsements. He is an ambassador for various makeup and fashion brands such as Anastasia Beverly Hills, Lilly Lashes and Jeffree Star Cosmetics.

In 2019, Cole accused the ACE family member Austin McBroom with rape allegations. The ACE family are LA-based Youtubers including Austin, his wife, and kids. Their Youtube channel is popular for daily vlogs, family life, pranks, and challenges videos.

After the accusation, Twitter users demanded the cancellation of the ACE family's Youtube channel. Cole blamed Austin for taking advantage of one of his close friends whom Austin was rumored to have paid $500,000.

According to Cole, the woman was forced to sign an agreement which means that she couldn't talk or complain about her relationship with ACE family members. After he shared the rape allegation in social media, Cole began receiving messages from women who faced sexual harassment in Austin's presence. But the allegation is like every other YouTube scandals and hasn't been proved yet.

Most of the time, Cole shares makeup tutorials based on prosthetic aka FX effects. As a trained FX makeup specialist, he can do a lot of complex designs that are most popular in high-end fashion events. He first shared his talent through his own YouTube channel. Eventually, Cole's Instagram followers began increasing rapidly.

Watch Cole Carrigan arrive at The American Influencer Awards with Lilah Gibney and Amanda Trivizas in 2019:

Cole once did Louis Vuitton Massacre, a Halloween makeup for Jeffree Star which became popular in social media. Jeffree is a fellow YouTuber who owns a cosmetic line. Recently, Jeffree and Cole has collaborated together for their YouTube videos.

Once,the two tore the expensive Louis Vuitton bag to complete a makeup look. Cole told that he destroyed his expensive and luxury possessions for art and fun. Some of his fans criticized him and wrote;

The amount of money he spent on this bag he is about to destroy could make a big difference in some people’s lives.

But Colen hasn't stopped using weird and extravagant techniques to his makeup tutorials.