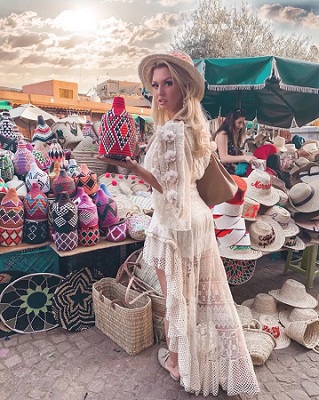 Who is Natalia Osada?

Natalia Osada is a German make-up artist, currently working for Bremen. She is well known for her first television appearance in the 2012 RTL II show The Cinderella Experiment.

Natalia was born on 29th May 1990, in Germany. Born to her German parents, Osada is of Caucasian ethnicity and holds German nationality. However, there is no information about her parents and education.

She might have completed her studies but the information regarding her high school and college attendance hasn't been disclosed.

The beautiful German make-up artist began her career in 2012 when she appeared in the RTL II show The Cinderella Experiment. She is also known as a candidate in the television show Catch the Millionaire, where she almost won the competition.

From September 13 - 27 of the year 2013, she appeared in the television reality show Celebrity Big Brother and ended up being second. The following year, Osada made her appearance in another television show Do not Stop the Action.

Additionally, Natalia also participated in the 4th season of Adam Seeks Eve - Celebrities in Paradise in 2017. She reached to finals along with her partner Bastian Yotta. The same year, media stated that Yotta and Osada are involved in a love relationship since the first day of the shoot. However, the couple could not last long, as Bastian announced of their break-up in December 2017.

Her recent appearance includes in the 2019 television show Get the F*ck out of my house.

Is Natalia Osada married or single? Know about her personal life

The Professional make-up artist is living a blissful married life with her husband Caner Demir. The couple dated for a long time before tying the knot. Since marriage, the couple has built a strong marital relationship bond. There is no rumor or controversies regarding their separation or having extramarital affairs.

Natalia was previously in a relationship with her partner from Adam Seeks Eve - Celebrities in Paradise, Bastian Yotta. However, the couple could not last longer than a year and broke up after a short dating period. The news of their separation was confirmed after posted of her ex-boyfriend announcement.

At present, she seems to be enjoying her married life with her husband. The couple does not share any child yet.

Natalia earns a decent amount of money from her career as a professional make-up artist and television personality. An average salary of a make-up artist in Germany is more than $2,500. Hence we can assume that Osada surely getting paid a sufficient amount for her work.

Moreover, her husband Demir also makes a good amount of money from his career as a dental expert. He makes more than $45,675 every year.

Together the couple has managed to make a huge amount of net worth which is estimated to be millions of dollar. The couple is often seen spending vacations in an expensive destination.

The gorgeous and talented make-up artist stands at a height of 1.75 meters / 5 feet 9 inches and weighs around 130lbs / 59kg. Similarly, she has blonde hair with attractive brown eyes.